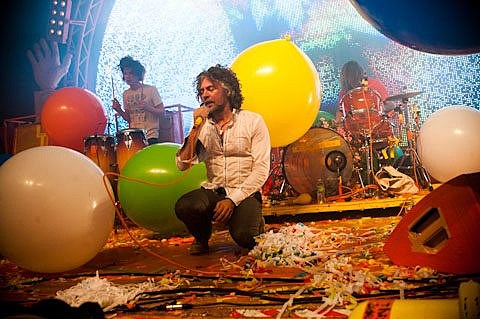 After he was let go from drumming duties in The Flaming Lips, Kliph Scurlock released a statement claiming that he was fired by frontman Wayne Coyne after taking a stand against against Christina Fallin, singer in band Pink Pony and daughter of Oklahoma Governor Mary Fallin, who wore a native American headdress in a now-deleted photo on her Instagram. In a new interview at Rollingstone.com Coyne responds to these allegations, and portrays Scurlock as "abusive, compulsive, pathological liar that will do anything he can do get attention":

The only thing that we would have to say about Kliph leaving is that he just was not very significant to us. And all the things he's saying about the reason he was fired, it's all just made-up lies. He knows we struggled with him for years and it didn't occur to us that it seemed that significant. I don't even use the word "fired." He just doesn't play drums with us anymore - that's the way I'd put it.

Later in the interview Coyne further reiterated this, saying that Scurlock's comments on Christina Fallin (singer for Pink Pony and daughter of Oklahoma Governor Mary Fallin) was just the final straw:

Kliph was not fired because of that [headdress incident]. Kliph was fired because of a thousand hateful things that he's done. And he just wasn't a very significant musical part of the Flaming Lips anyway. I think the day after we fired him, we played a show in New Orleans without him. Steven's the drummer. Anybody that listens to those records and think they're hearing Kliph, they're hearing Steven. And Steven is with us and will always be with us.

"Hateful" is a word Coyne repeatedly uses to describe Scurlock. An example:

Anybody who knows him knows what kind of a hateful person he is. I mean, anybody that looks at his stuff could see that most of the bands that we would play with, he despised them. To their face, he would say, "You guys were great" and then 20 minutes later he'd get online and say, "These people are a bunch of fakes. They suck." That would be almost every band we ever played with. The more that time went on, people would pay more attention to him because of his connection to the Flaming Lips.

As for the Native American headdress incident, and the instagram Coyne took of his friends and a dog wearing one...

I understand now that if I'm a spokesperson for any kind of behavior, I shouldn't have done it, and I regret doing it now. I am sorry. I realize now that it goes deeply to the heart of some Native Americans. And I definitely regret it. I don't publicly ever say it, but I live in a neighborhood that was predominantly Native American in the late Seventies and Eighties. I haven't done it publicly, but there's cases of me helping Native Americans. It's all just Internet hate, you know?

In other news, he also talks about who is going to replace Scurlock:

Well, there's two guys. I think we're going to use two different guys. Who is the guy that plays with Radiohead and Portishead? [Clive Deamer] He's great, and we met him at a couple of festivals last summer. And I like the way that they were using two people to do the slightly electronic stuff versus the real rock stuff, and we were trying to go that way. We were thinking of it anyway, and then this thing that happened, there are two guys here who want to be part of this thing. I think it'll be a great addition to this cool group of weirdos that we take around with us, and they're guys that we know right from here. I think it will be really exciting and the Flaming Lips will be better than ever.

Read the whole, lengthy interview over at Rolling Stone.