Waxahatchee at 285 Kent earlier this month (more by Amanda Hatfield) 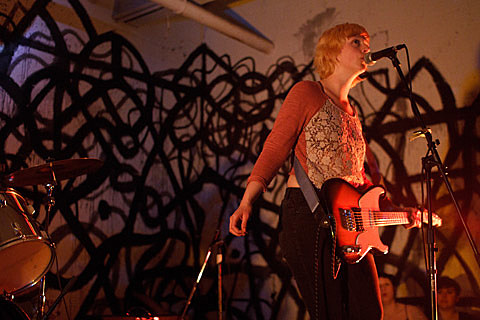 As you may know, Waxahatchee will be playing two shows in NYC this Saturday (4/27). One of those is at Glasslands with The Babies and Harlem-related band Las Rosas, which is now sold out.

Before that she also plays the free, all ages WBAR-B-Q at Barnard College in Morningside Heights. In addition to Waxahatchee, the lineup includes some great bands like Twin Sister, Speedy Ortiz, Roomrunner, Scott & Charlene's Wedding, Krill (who just replaced Swearin'), and others. It runs from noon to 8 PM, and as the flyer points out, is open to the public: 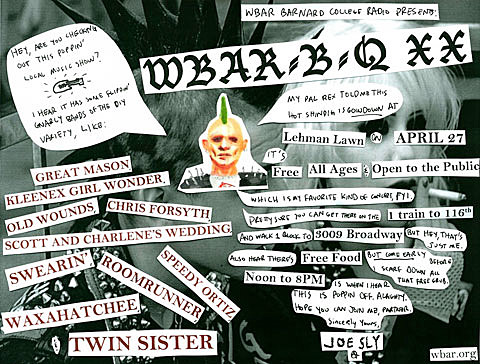 You can also catch Waxahatchee for free in NYC again this summer. She was added to the previously announced Generationals/Sallie Ford show happening on July 11 on Pier 84 as part of the free, all ages RIver Rocks series.

In related news, we recently mentioned it in a What's Going On? post, but in case you missed it, Waxahatchee's Katie Crutchfield and Swearin's Keith Spencer released a new EP for their Great Thunder project. It's called Strange Kicks and you can stream it in full below.

Waxahatchee isn't the only band playing WBAR-B-Q who also plays a NYC show that night. Speedy Ortiz, who just signed to Carpark for their debut album, are playing a previously discussed release show for their new 7" at Shea Stadium (4/27) with Aye Nako, Butter the Children, and Advaeta. Admission is $8 at the door. You've already heard the a-side from Speedy Ortiz's new 7", and you can now stream the b-side, "Hexxy," below. They have other upcoming shows too.

All Waxahatchee dates are listed, along with all song streams, below...