"We do our own thing, on our terms or not at all. Kvlt can suck my fucking dick. I want it all. Evil has no boundaries" - Vetis Monarch of Weapon 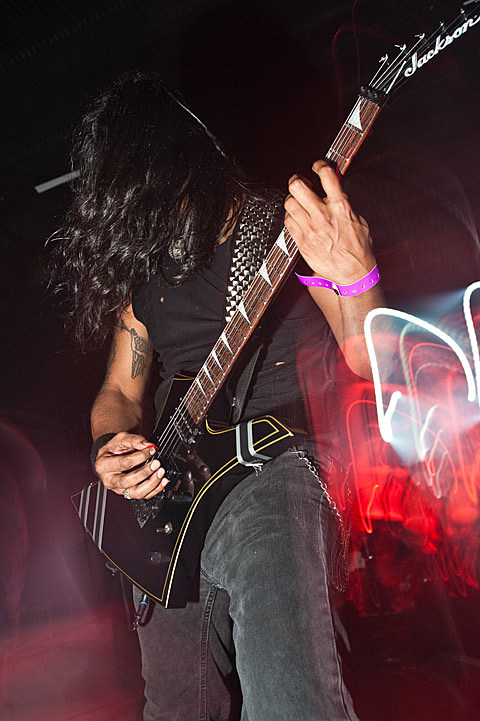 Canadian black metal horde Weapon have made a few major transitions of late, moving from a staunchly independent black metal label (The Ajna Offensive) to one of the bigger labels in the genre (Relapse) and taking their show from recording-only to full-on tour mode. The occasion? The release of their third LP, Embers and Revelations, due on October 9th. Stream the new song "Vanguard Of The Morning Star," which we're premiering below, and you can order your copy at Relapse.

Weapon see these transitions as opportunites (as they should) and as such, we cornered the creative mind behind Weapon, Vetis Monarch, for a few interview questions which you can read below.

Don't forget that Weapon will be in NYC on 11/19 at Saint Vitus with Nachtmystium and Jarboe. Tickets are still available.

Song stream and Q&A are below.

Embers and Revelations is your first release in two years, and first away from The Ajna Offensive and towards Relapse. What prompted the move?

Vetis Monarch: Growth, refusal to remain stagnant, and inevitability. The Ajna Offensive was an amazing indie label to work with, and over the course of Weapon's time there, we actually ended up becoming really good friends with the owner, Tyler Davis. Nothing but the deepest respect and gratitude towards Ajna. However, we are growing as a band; things are evolving. Our path is dynamic and multidimensional. We want tour and play 'bigger' gigs; we need bigger recording budgets than what Ajna can afford, plain and simple. That's where support from a major label comes in. If it wasn't Relapse, it would have been somewhere else; but credit where credit due, Relapse Records have been great to us thus far. There has been no interference on our creative and ideological path, and they have delivered.

Art for Embers And Revelations 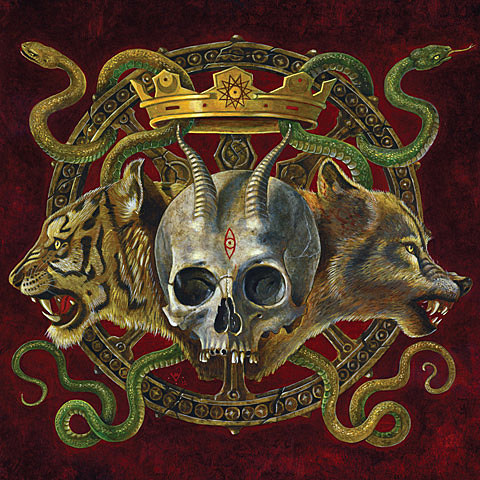 An artist is usually never satisfied with his work. That said, both of your previous releases were rather well received. What were your personal goals going into the studio with this set of songs? How did you arrive at the production team that you used?

Like any band that takes it's craft seriously (and I mean real bands, not bedroom projects and hometown heroes), we are very critical of our work and never satisfied. It's cliche upon cliche, but it's the truth. I think our first album was received rather poorly, because at the time the scene was all about warfago metal from random countries; New Zealand, for example. 'Drakonian Paradigm' was received well by the media, but a lot of our own fans completely dismissed us because we tried different things musically. Many people would have been happy if we had just replicated the style on our EPs, but we don't give a fuck about other people's happiness, you see. The only downside of that album is the weakness in the bass and a thin production; aside from that, 'Drakonian Paradigm' is exactly what it was meant to be. 'From The Devil's Tomb' was quite a departure from the first album, in that it was so vehemently death metal; at the time it was the most savage thing we had ever done. That again was received well by the media, and actually put us on the map with legitimate bands, so to speak. I used to have nightmares that we wouldn't be able to top 'From The Devil's Tomb'; the nightmares stopped after I heard 'Embers And Revelations' in it's entirety.

We just started looking for a studio and a producer who understood what the fuck we wanted. Being a baby band on Relapse, it's still a ways away until we can start requesting things like Mana Studio, specific producers and other such luxuries; so we just looked in our own backyard for the best guy for the job. Lucky for us, we stumbled upon Terry Paholek who is a world class studio guy; Canada's best kept studio secret, but not for long. We sat down with Terry, had lengthy discussions about what we wanted and did not want, what this album is - thematically, musically, PERSONALLY - and then proceeded to record the best album of our career thus far. 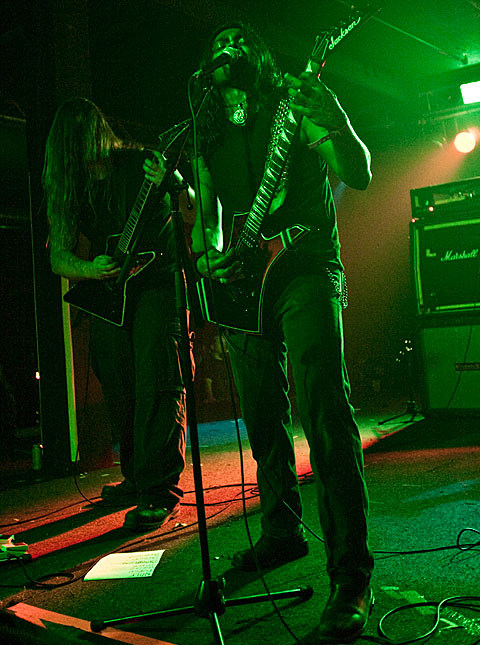 Its seems you have been out for a considerable amount of time since the beginning of the year. Do you see Weapon as a touring band now?

Yes, we do. When I started Weapon back in 2003, I had very little intention of playing live, and touring is something I didn't even consider. But when you start jamming with the right people, and have that chemistry brewing, playing live becomes another inevitability. After Kha Tumos got on bass guitar, he started bugging us about it. He didn't understand why we wouldn't want to play these songs live. And I may be a stubborn cunt, but I know when to listen. So we started out with very selective gigs here and there, and developed into a touring band. That being said, we are still very focused on the balance between quantity and quality. 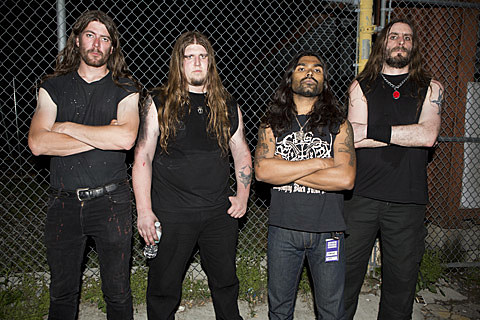 Personality, musical and social differences aside, who would you like to tour with from an inspiration/good tourmate/musical-fit point of view? Why?

I speak only for myself here, not the rest of Weapon. We all have differing opinions on such matters. If I approach this from a inspirational / educational perspective, I would tour in a heartbeat with Cannibal Corpse, Behemoth, Immolation, Nile, 1349, Krisiun, Gorgoroth, Unleashed, Vader, Hate Eternal, Marduk, Suffocation, Belphegor etc. Basically, quality death / black bands that are touring machines. These bands have been doing this for a long time and they are very good at what they do. It would be foolish of us to not learn from the masters of the craft. (I guess Slayer would be okay too..)

From the standpoint of good tourmates / musical and ideological fit, the list is a bit different. If money was no issue, and time permitting, I would want to tour with Loss, Mithochondrion, Rudra, Ofermod, Nightbringer, Nader Sadek, Aosoth, Azarath, Prosanctus Inferi, Hour Of Penance, Inquisition, Adorior, Wodensthrone etc. There are many bands I could add to the second part of this list, and I'm sure I'm forgetting plenty right now. Only some of these bands I know personally and consider them good friends, so there's the camaraderie factor; but all these bands make great music, so the tour tales would be infamous, and the gigs would be historical.

Nachtmystium and Jarboe are both on a forthcoming tour with Weapon, what are your thoughts on each band and how they have(n't) influenced your style of music?

I have a genuine respect for any band out there that's working their butts off to pursue what they want; both Nachtmystium and Jarboe are doing their own thing, regardless of other people's opinions, internet warrior abuse and so forth. That's the kind of FUCK YOU attitude I can get on board with. Neither have influenced Weapon's music in any way, though. Our foundation comes from the pioneers of black and death metal; I don't think any metal band that was formed after 1989 has influenced the musical structure of Weapon. 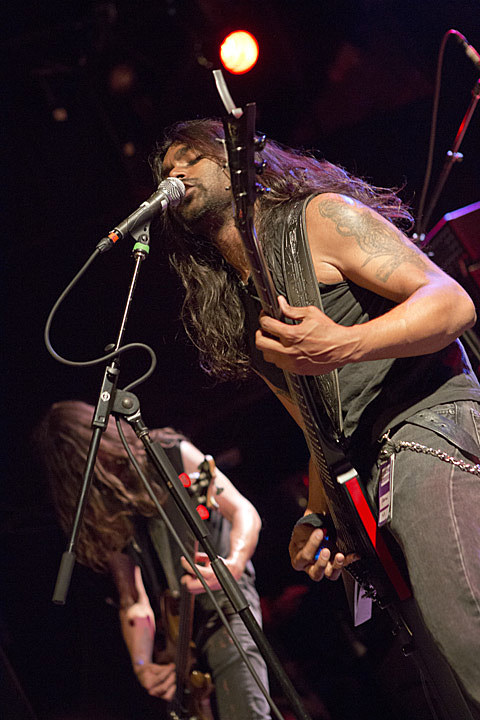 You are approaching your 10th anniversary as Weapon. How has your perception of the band shifted in the past 10 years? How has the changing landscape of black metal, and metal in general shaken up the underground and your band in particular?

Well, it's become a real band. It's become an entity in itself. A lot of shitty things have happened in my life in the last 10 years - mostly by my own doing - but all of that has shaped Weapon. In the beginning I was perfectly content with releasing a Demo tape, a 7" EP and MAYBE someday an album. That's about as far as I thought it would go. I never imagined being signed to the label that released 'Onward to Golgotha'; that did not cross my mind. I look at the band's timeline how Billy Pilgrim's alien friends look at time, and I nod at my brothers in Weapon. There's so much more to do, though.

Let's make one thing clear - Black Metal is not what it used to be. And I'm not trying to be some nostalgic, curmudgeonly asshole here, glorifying the old days; facts are facts. Yes, there are new, excellent bands around making top shelf Black Metal, bands that are genuinely satanic and sinister. But the truly dangerous environment that Black Metal once exuded is long and far gone. You have hipsters and hippies now who openly claim to not only listen to Black Metal but even dare to start their own "black metal" bands; this would have been unthinkable in 1991. It would have been dealt with via violence right away, squashed before the thought could even form properly in some limp-wristed pacifist's mind. Nowadays it's a party. Everyone is invited, let's all gather around and listen to the new retardation shat out by Darkthrone. Let's see if Fenriz makes a stupid metalloid face posing with my band's thrash record released by label no. H60089K1. Let's all wear gasmasks.

Weapon stays far away from all this nonsense. We do our own thing, on our terms or not at all. Kvlt can suck my fucking dick. I want it all. Evil has no boundaries.

Metalheads are always discussing their "gateway drug" into the genre. How did you get into extreme music?

Since you play in a heavy band and are surrounded by it constantly, does inspiration for that style of music come from heavy music anymore? If so, how have your tastes changed in the past 10 years? If not, where does inspiration come from, musically speaking?

It does, actually, but it also comes from other styles of music. And let me be clear that it's inspiration, not influence. For influence I pretty much look to the same 20 records that I looked at back in 2003. I just have a different way of executing it now, a different appreciation and perspective. My tastes have changed quite a bit over the last 10 years, I'm deeply aware of that. Except for garbage called reggae and rap / hiphop, I can find something useful ad rewarding in most genres of music. I just know that metal is separate; the metal must not and cannot be tainted by tourists and other genres.

Nowadays a lot of my inspiration comes from books, and not just the occult kind. Even the bleakness of Dickens' novels has inspired me; I'm still reeling from the asskicking that I received from 'The Master And Margarita' and 'A Painted Bird'; those books have been a tremendous source of inspiration for my riffs. I find it exhilarating to take something written by a fictional author and then applying it in a satanic and occult context.
The darkness is always there, one just has to be receptive to it.