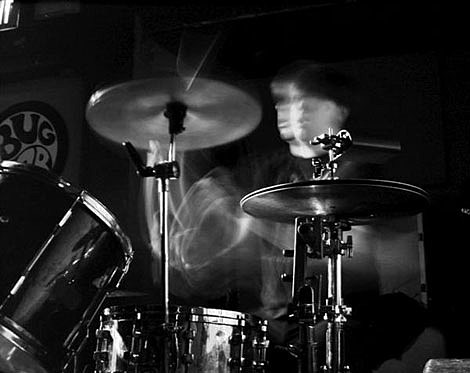 "I'm hard-pressed to find contemporary free jazz that I can relate to. I want to hear really violent fucked-up free jazz records, and I don't hear anybody else makin' 'em, so I make 'em myself." -[Weasel Walter in L.A. Record]

Drummer/composer/improviser Weasel Walter is visiting Bard College Thursday (3/5) to give a video lecture on "the NYC No-Wave sound, complete with rare footage and audio from bands involved in the movement." (Walter wrote an introduction to Marc Masters's book on the subject, No Wave.)

He then comes to Zebulon in Brooklyn on Saturday (3/7) for a jazz improv gig with NYC guitarist Mary Halvorson. The pair played together during Walter's last NYC stint in September. Expect a disquieting, dynamics-filled set that touches on both Halvorson's melodic debut CD, Dragon's Head, and Walters's tension-heavy drums.

Among the releases coming from WW's ugEXPLODE label is a possible Walter/Halvorson/trumpeter Peter Evans CD-R, out this summer. From MySpace: "i'm toying with the idea of putting out some stuff of that trio from our previous gigs, but haven't discussed it with them formally yet. there was a lot of video shot of two of the sept. shows, and we may release some of that as well."

Hardcore/metal group xBxRx, which features WW on drums, is currently mixing its next record, which Walter described as "some improvised tracks as well as songs...sonically rich and varied. totally intense, as usual."