Weatherbox at Saint Vitus in July (more by Amanda Hatfield) 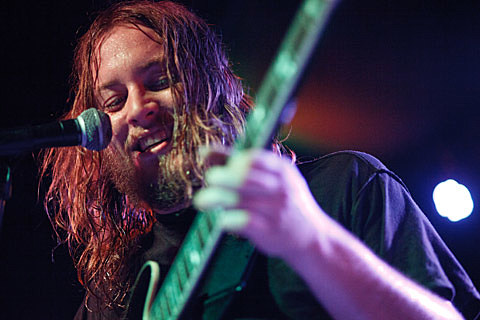 Earlier this year, Weatherbox had to drop off their tour with Dikembe (after hitting NYC) due to frontman/main member Brian Warren's mental health issues. It seemed like things were looking better when Weatherbox announced a tour with Finch and Maps & Atlases, which is set to kick off later this month, but now they've unfortunately had to drop off this one too. The band writes on Facebook:

It's with a heavy heart that we must announce that we're pulling off the Finch/Maps & Atlases tour. For us it's a double-edged sword because the only way we could have possibly been kept from this tour is health and unfortunately that's still the issue we face. Brian has been in and out of facilities since we returned in early August and unfortunately the symptoms he encountered back on tour continue to plague him.

We'd like to extend a huge apology to Finch, Maps & Atlases, all the fans and promoters, and anyone else affected by our cancellation. We believe more that anyone that the show must go on, but we simply cannot tour until Brian can be stabilized.

We'd like to thank Triple Crown Records for their continued support and we're vowing now that the 'Box will be back in action in 2015!

The tour is still happening without them and hitting NYC on October 18 at Gramercy Theatre. Tickets for that show are still available.

In related news, earlier this week we posted a new song by Future Crooks, a band featuring Brian Warren on guitar.