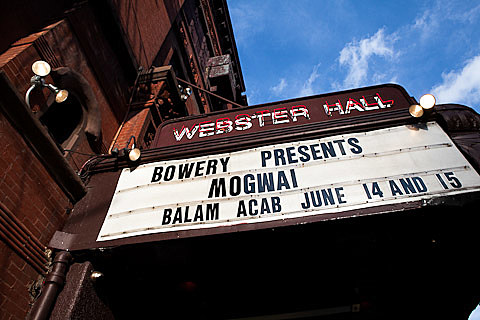 Webster Hall's 1400 capacity Grand Ballroom has long been a place that Bowery Presents books concerts. It's there they can put artists that are theoretically too big for Bowery Ballroom and too small for Terminal 5.

A powerful force in the music industry, Bowery Presents can hold on to a band's NYC concert history for the length of its career by placing the band in rooms of various sizes. They have options: tiny Mercury Lounge to the new Rough Trade to the giant Terminal 5 to the even bigger Barclays Center, not to mention Central Park Summerstage and Celebrate Brooklyn at the Prospect Park Bandshell, Radio City, Beacon Theater, Town Hall, and possibly a new space in Bushwick that will be Webster Hall's successor, and even MSG. But now they'll have one less.

As of September 1 (not counting shows which are already booked), Webster Hall's recently-enlarged team of five talent buyers will be doing it all themselves. They already booked the smaller rooms, but now that team will collectively book all of Webster Hall's rooms which include the Grand Ballroom, The Studio, Marlin Room, and the new Slake (formerly The Wall).

Webster Hall now counts Ric Leichtung of 285 Kent fame as one of their own. The rest of the booking team is Heath Miller, Kenny Schachter, Alex Rossiter and Laura Bo Sherman.

Is Webster Hall crazy thinking they can compete with their 1400 person room on their own? Time will tell, though maybe it doesn't matter that much since Webster Hall's regular club nights seem to do just fine for them.

An email Webster Hall sent out to booking agents reads:

We will now be better suited to maximize the artist experience and fan enjoyment by focusing on every detail for each show that Webster Hall hosts, which already includes The Studio at Webster Hall, Marlin Room at Webster Hall, and our new venue Slake (around the corner from Penn Station).

After 130 years, Webster Hall retains its local focus and has strategic alliances in place to ensure that New York City is an artist's most important experience. We welcome you to pay us a visit or to let us know when we can visit you.