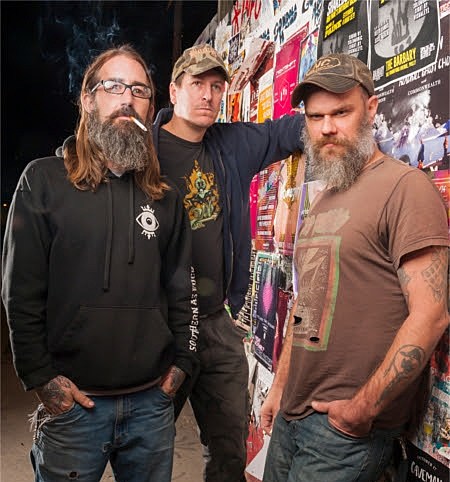 As a young band, Weedeater plied their trade touring. They logged countless hours on the road, and it's that work ethic centered around bringing the riffs to the people that continues to guide the latest version of the group, one that features former Zoroaster bassist Travis Owen taking over behind the kit after Kirkum's departure. "For us, it's all about the live show," Collins says. "Bands just sound better live than they do on record. If you think you're better on record, then you're not as good a band as you thought you were." From that vantage point, Goliathan, the band's fifth full-length, is a smashing success.

Not only does the record capture the spirit of Weedeater's live performances, but it's also a culmination of the work that came before it. Acoustic, mellow bits that were only ever hinted at before find room to breathe on long-player number five. Tracks like "Bow Down" and "Claw of the Sloth" already sound like battle-tested numbers ready to be deployed on eager fans, but the most earth-shattering moment on Goliathan comes at the very beginning.

Stoner doom crushers Weedeater recently dropped album #5, Goliathan (their first for Season of Mist), and the quote above is from Invisible Orange's piece on the record, by writer Chris Brown (not that Chris Brown). Read the rest here.

Like that quote says, Weedeater are relentless road dogs. They already visited us once this year and they're set to do so again this summer. The new dates are with '70s-inspired doomers Kings Destroy (who put out their self-titled third album earlier this year), and they hit NYC on August 11 at Saint Vitus. Tickets for that show are on sale now.

All dates are listed, with streams of Goliathan and Kings Destroy, below...