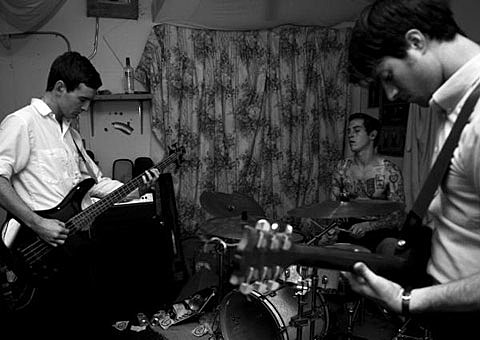 According to Bill, Weekend "pretty much destroyed Glasslands. If not the actual structure then the eardrums contained within. Wow." If you're confused, that's in reference to the show they played at Brooklyn venue Glasslands Gallery last night, 11/21, with their tour mates Young Prisms. Tonight they were scheduled to appear in MA, BUT they reportedly "just got into a pretty bad wreck in NYC - band members all ok but van is totaled - show in Boston tonight is canceled.... remains to be seen what the status is for the rest of their tour. will keep you posted." Damn that sucks. Remaining dates on the tour include Philly, CT, and 11/27 back in NYC at Cake Shop. Stay tuned for updates. UPDATE: The Boston show is back on. Weekend just hopped in Young Prism's van.

A video from the Glasslands show below...