"expect absolutely nothing from me..." - The Weeknd 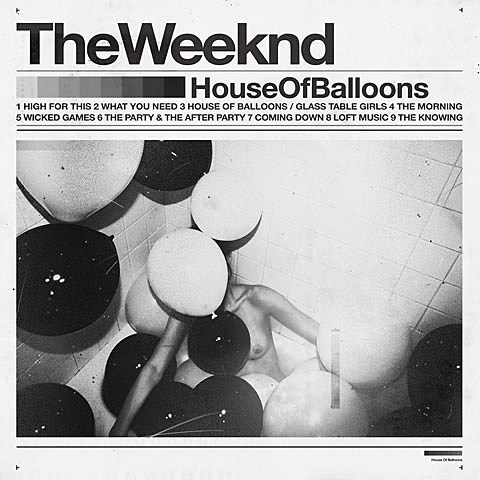 Readers of this site should be very familiar with Weekend, who just played a BrooklynVegan SXSW party and who we just interviewed. Their tour with Wire hits New York this Tuesday (4/5). Tickets are still on sale for the MHOW show, and for Weekend's show at Mercury Lounge the next day.

Weekend is not to be confused with the Canadian hazy electro-R&B artist Abel Tesfaye who records under the moniker The Weeknd (in part because he spells it "Weeknd" and not "Weekend"). He's currently all the rage due to his nine-song mixtape House of Balloons which he released last week for free on his website. Hype wars are only adding to the attention. A Pitchfork Best New Music tag and praise from the Village Voice are in controversy with an article from The Guardian which insists "indie-leaning music critics are once again getting R&B spectacularly wrong." Rolling Stone calls the Weeknd an "Artist To Watch" ("mama if you can hear me... i did it.. i'm a rolling stone now..", The Weeknd Tweeted). NY Mag highlights a funny new "PBR&B" subgenre name people are using on Twitter to describe the "hipster R&B" category that also includes artists like How to Dress Well and Odd Future associate Frank Ocean.

Like recent albums by James Blake and How To Dress Well, The Weeknd's mixtape is constantly crossing the lines between indie and R&B. With two Beach House samples (The Weeknd says their management is "cool as fuck"), a Siouxsie and the Banshees sample, and synthy beats that would feel far more at home at Electric Zoo than on an R. Kelly record, The Weeknd (whether he's ruining R&B or revolutionizing it) is certainly up to something worth listening to.

The Weeknd also has support from fellow Canadian Drake, who tweeted lyrics and linked to a song download before the mixtape was fully released. According to The Boombox who say Drake broke the new artist, it's rumored that The Weeknd, Drake and producer Noah "40" Shebib will be working together in the near future.

House of Balloons is available for free download on The Weeknd's website, but if you want to hear a couple songs first, check out the Beach House sampling "The Party & The After Party" and the album opener which contains the disclaimer, "You wanna be high for this," below...

The Weeknd - High For This