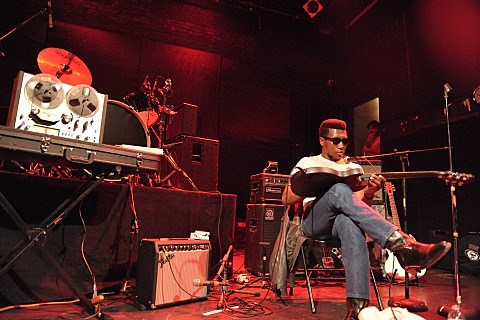 The Weeksville Garden Party, a series of free shows in Weeksville Heritage Center which happen every Saturday in July, has been expanded. You already knew that Spoek Mathambo (who played LPR last night) will be playing the one this Saturday (7/14), and since we last spoke the lineup for that show has been expanded. It also includes FlyLo associate/bass wizard Thundercat and R&B singer Georga Anne Muldrow, whose new Madlib-produced LP is one of the best of its genre right now. Georgia Anne will be performing with special guest Dudley Perkins, who she recently toured with. Doors for Saturday's show are at 4 PM.

Then, on July 21, The Weeksville Heritage Center will be graced by Willis Earl Beal, who has yet to reschedule that free show with Bobby Womack but this one should tide us over until then. The show is also with Krystie Warren. No show has been announced as of this post for Saturday, July 28.

Speaking of that Bobby Womack show, if you missed it, just when it looked like things were getting better and Bobby was going to play a MHOW show on July 3, he ended up canceling that one too. Hopefully Bobby will get well soon and finally make his way back to NYC. Check out this recent interview he did with NPR where he spoke about what's been going on:

"Before me, there was a higher and stronger supreme being that put me in the position to have that talent," he adds. "I've seen [drugs] take away my friends, from Wilson Pickett to James Brown to Michael Jackson, and I can just go on naming. I say, if I'm still here, God must still have a purpose for me."

The current Weeksville Garden Party schedule is below...