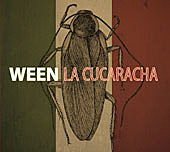 Ween's new album La Cucaracha is out October 23, 2007 on Rounder Records. Those who pre-order it now through THIS LINK, can also order a limited edition t-shirt at a reduced price with the CD (offer ends Oct 22).

I've got a pair of tickets to give away to each of the previously announced Ween shows at Terminal 5 in NYC - even the sold out one. To win, email BVCONTESTS@HOTMAIL.COM (subject: Ween). Include your first and last name in the email. Mention which date you would prefer. Two winners will be picked at random.

It was also announced today that Pitchfork will be curating this year's ATP - a UK Festival happening in May. Their choices so far:

All Ween tour dates below....