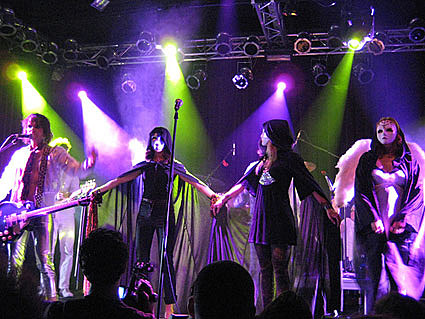 Luckily, this isn't really about metal, it's about novelty metal. Sunday night, the Highline Ballroom brought together not one, not two, not three, but four of our area's finest examples of metal schtick. I only saw one of them, actually. I missed Boyz Nite (known for their "Die Hard" song), Queen Diamond (teenage girl King Diamond tribute) and Beatallica (you can figure it out). I came specifically to see Tragedy, the Number One All-Metal Beegees Tribute Band in the Tri-State Area. And more specifically, I came because I'm friends with the bassist. [Soundbites]

But more about Tragedy later. First let's talk about Ween... 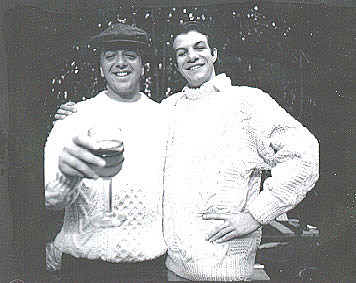 Ween are set to release their next album La Cucaracha on October 23, 2007 on Rounder Records. Wait...Rounder Records? What do you have to say about that Dean Ween?

The guy from Rounder drove down to New Hope from Massachusetts and took us to lunch. We've been on a lot of labels the past 23 years and had a lot of lunches and we've heard a lot of "pitches". After making small talk for the first 20 minutes I finally felt like I should ask him something, anything-- since he drove all the way down here. The only thing I could come up with was "are there any other bands on Rounder comparable to Ween? I mean when I think of Rounder Records I think of all those Thorogood records and mostly folk type stuff." He said "no, not really." We all started laughing and the decision was made in our minds right there that this was where we needed to be. Later that night we watched the Red Sox game at our studio and then he drove back to Boston t he next day. That's the whole story, and now Ween is on Rounder. Anyway, it's not my job to critique Ween and measure one of our records against another, but I will say that we are super happy with La Cucaracha, we consider it to be a party record, unlike our last record which was more of a Jonestown type party vibe.

Good story, but there's more. Let it be revealed right here and now that "the guy from Rounder" is none other than Izzy Stradlin (aka Rounder A&R guy Dave Godowsky) from the recently disbanded Guns N Roses tribute band Mr. Brownstone... 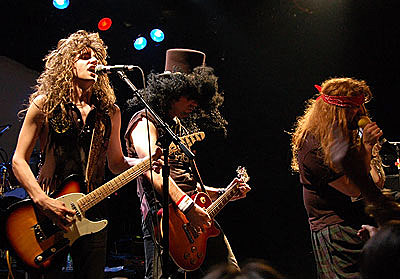 More like NO, NOT REALLY BROKEN UP. Tickets are now on sale for a Mr. Brownstone reunion show at Bowery Ballroom on November 10th (they were broken up for a whole year and four months). They're also playing the Paradise in Boston on December 15th, and tickets are about to go on sale for that one too.

And speaking of metal reunions, Satanicide (who share a member with Mr. Brownstone) is also back! Possibly broken up for an even less amount of time, or maybe more - who can keep track....

On the heels of their sold-out Fillmore at Irving Plaza performance in August, SATANiCiDE will reunite for a one last show (at Bowery Ballroom this Friday September 7th). Making the 17 mile trek from Jer-Z with SATANiCiDE will also be Moby, and comedian Hal Sparks of Showtime's, "Queer as Folk". Other special guests include Suicide Girls, and SATANiDANCER, (and girlfriend of SATANiCiDE's Aleister Cradley) Peg Ramon-Stamos.

"How envious we are of you, all our fans", says SATANiCiDE lead singer Devlin Mayhem. "Unlike you, we will not be able to see our own show. We will be too busy rokking to witness the greatest spectacle of rokk this side of the Holland Tunnel".

Sharing the stage will be the recently Warped-toured THE NOTORIOUS MSG. Blasting out of the streets of Chinatown, THE NOTORIOUS MSG have arrived with a vengeance. Serving up deep-fried beats straight from the Chinese ghetto, they will not stop until they achieve complete world domination.

That's right, Moby (musical star of the new videogame Bioshock) will be there (again). Also (though not mentioned above) - comedian Dave Hill (a musician himself in a band that also shares a member with Satanicide) is also involved in this show in some way. Tickets are on sale.

But wait - what about TRAGEDY? Well, besides sharing a member (Phil) with Satanicide and Dave Hill's band Children of the Unicorn, not to mention Hair Suppply, Tragedy will in fact be opening at all three reunion shows - first for Satanicide at Bowery, and then at both of the Mr. Brownstone gigs.

BONUS POINTS: Now see if you can match this all up with the related post from over 2 years ago. Rock.