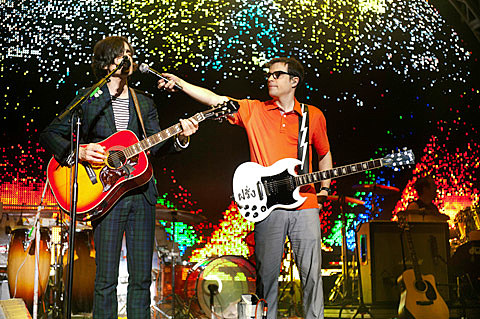 Weezer have the return of their Weezer Cruise coming up in February, which includes Cat Power, DIIV, The Cribs, Ash, Palma Violets, and more (tickets); and they've just announced a few club dates to go down before then. One of those dates happens in the NYC-area at Long Island's Paramount on November 24 with Elliot and the Ghost opening. Tickets for that show go on sale Wednesday (10/30) at 10 AM with a venue presale starting Tuesday (10/29) at 10 AM.

According to Alternative Press, Weezer are talking about reuniting with The Cars' Ric Ocasek to produce their next album. Ric was behind the boards for their excellent self-titled debut (aka Blue Album), and the similar looking 2001 album that tried to recreate it, Green Album. Weezer haven't released a new album since 2010 and they haven't released a good one since... (but we'll still keep our fingers crossed).

They also have plans of a greatest hits album, and a potential fourth installment of Rivers Cuomo's Alone series.

All dates are listed, along with some recent live videos, below...