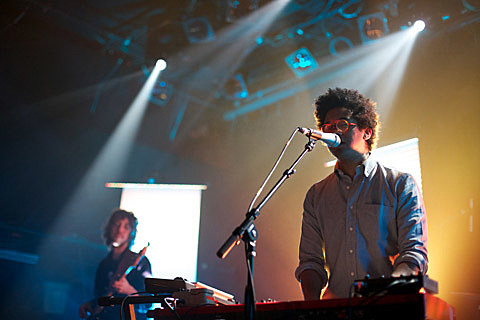 As mentioned, the Weezer Cruise is returning in 2014 from February 13-17 from the coast of Jacksonville, FL to the Bahamas, and the lineup for the 2014 cruise has just been announced. Like the inaugural cruise, the lineup is heavy on solid indie rock/pop, including Cat Power, Toro y Moi, DIIV, The Cribs, Ash (who appeared on the Angus Soundtrack with Weezer), Palma Violets, Holy Fuck, Bleached, Caveman, The Orwells, and more. It also includes Adam Devine from Workaholics. Cat Power performs with Weezer at the beach show, and the cruise will also give concertgoers a chance to see the band members take yoga classes, do karaoke, and more.

In related news, Toro y Moi just remixed Disclosure, which we posted in today's What's Going On? post, but if you missed it, you can also stream it below.

More Weezer Cruise info, including info on making a reservation, is at theweezercruise.com. Full lineup and lineup announcement video below...