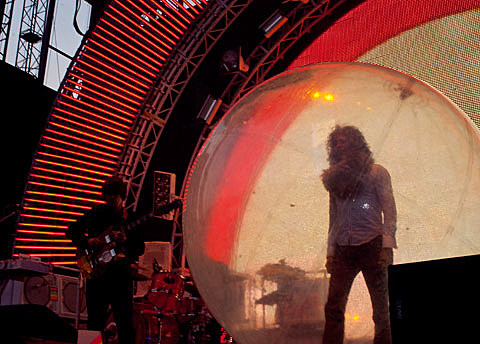 We previously mentioned that the Flaming Lips would play after Weezer at their co-headlining shows at Jones Beach and PNC Bank Arts Center "because the Flaming Lips make such a big mess that its sort of logistically unwise to take the stage after them." However, it's just been announced that:

With their respective gear set up side-by-side, Weezer and The Flaming Lips will literally share the stage together on Thursday, July 28th in New Jersey and Friday, July 29th in New York.

"Weezer and the Flaming Lips will trade off songs back and forth for the entire length of each concert, allowing them to take turns playing a few songs each in one big exciting set." Yeasayer open each show.

Flaming Lips mastermind Wayne Coyne remarked: "The Flaming Lips and Weezer are playing a show together...where they are actually playing together."

"I asked Wayne if he has an extra bubble I could ride in," quipped Weezer frontman Rivers Cuomo.

TIckets are still on sale for both of these shows.