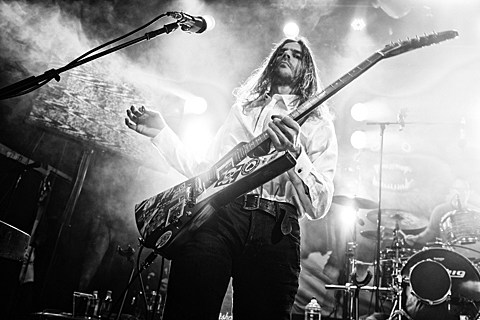 First Weezer was announced for Burger Records' Burgerarma Four festival, and more recently it's been announced that Burger signed The Relationship, the band fronted by original (and current) Weezer guitarist Brian Bell. They've had a rotating lineup, but Brian's currently joined by drummer Anthony Burulcich (who was in The Bravery and briefly in Morrissey's live band), bassist John LaRue (who's also worked with Albert Hammond Jr), and guitarist Nate Shaw. Their new 7", "Oh Allen," will be out April 8 via Burger, and you can watch a video of them playing that song at last year's Weezer Cruise, below.

The Relationship are also on Burgerama Four, and right after that they'll head out on a lengthy US tour with support from Gringo Star. The tour hits NYC on April 29 at The Studio at Webster Hall. Tickets for that show go on sale Friday (3/6) at 1 PM. All dates are listed below.

Burger's '90s alternative game has been on point lately. To recap, in the past year they've also signed The Muffs and Superdrag spinoff The Lees of Memory.

And in other Weezer news, Detour, the upcoming FOX sitcom based on Rivers Cuomo's life, has found its Rivers. Deadline reports that British actor Ben Aldridge will star as Michael Sturges (the character based on Rivers), and that Joey Morgan will be cast in the pilot too. The pilot was written by Psych creator Steve Franks and directed by Jeremy Garelick.

The Relationship tour dates and video, below...