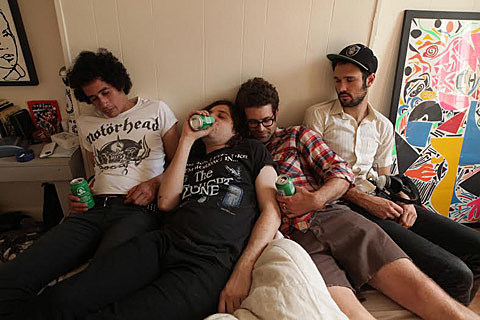 Not unlike Pampers or Foster Care, Brooklyn four-piece Weird Womb make noisy punk that is both beer-fueled and kinda brainy, with pop knowhow in there amongst the empties. The band's forthcoming Laziness EP was recorded by Alex Bonenfant (Metz, Crystal Castles) and "Tanned Tits" from it makes its premiere in this post. Stream it below and look for Laziness later this summer.

Weird Womb have a few East Coast gigs lined up this month, including a few here in Brooklyn. They'll play Saturday (6/7) at Grand Victory with The Brats; The Deli's Northside Fest showcase at Silent Barn on June 12 with Big Ups, Lost Boy?, Butter the Children, BOYTOY, No Shoes, and Dead Tenants; and then also play 258 Johnson Ave on June 21 with Unstoppable Death Machines and more TBA. All tour dates are listed, along with the new track stream, below...