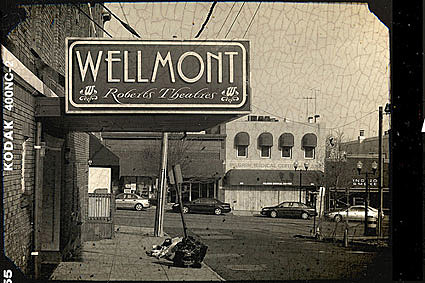 "Earlier that evening, one of the architects handling the restoration of the Wellmont Theater at 5 Seymour St., slated to reopen at the end of October or in early November as a live music and performance venue, also appeared before the commission.

The Rosen Group, a Manhattan-based real estate development company, bought the theater about a year ago and is in the process of refurbishing it.

Michael Costantin, the architect-of-record for the project, said the building, dating to 1922, is one of the largest halls in the nation. Now that many of the remnants of the movie triplex that previously occupied the space have been removed, the view of the house from the stage is "completely awesome," Costantin told The Times. The interior is rife with ornamental plasterwork, with many of the surfaces decorated with relief sculptures.

Work crews are now in the process of transforming the floor, which angles downward toward the stage, into two tiers that descend to the orchestra level. That main floor could be rented out for banquets and other functions, or provide space for about 800 removable, reserved seats for shows, Costantin said. But, more frequently, that area will provide standing room for concerts, while about 1,000 fixed seats will be up in the balcony.

The architects had been hoping they might be able to convert one of the rooms housing an 8-foot-high cast-iron fan, among the building's original exhaust fans, into a VIP lounge, with the huge fan as its centerpiece.

The tenants of the revamped theater, who include Montclair resident and promoter Andy Feltz and the principals of the Bowery Presents, who own the Bowery Ballroom in New York City, have signed a 49-year lease for the theater. The exact dates of the first shows, and who the first acts will be, had not been established as of The Times' deadline, but the lineup was expected to be announced soon." [The Montclair Times] (thx Danielle)

WellmontTheater.com is operational, but without any listings yet. See below for a list of some of the already-scheduled shows....

* some of these dates are not 100% confirmed