Common Market is one of my favorite recent discoveries. Sharon Jones and the Dap Kings are playing the Apollo Theater October 6th (tix). N.O.R.E. is releasing Noreality in the next few weeks, unfortunately with wack cover art. Pieces of Peace are a soul band from back in the day - with an album that was never released (until now), and they should make for great sampling material for today's rappers. On top of the positivity and good times, KRS injected the crowd with a dose of inspirational storytelling. See, before BDP fame, way back in 1980, KRS was homeless. His home of choice was Prospect Park. His bed of choice was the Prospect Park bandshell. The very bandshell he was now performing in! He would sleep at night and during the day hang out at the Grand Army Plaza Library getting his knowledge on. As a young KRS poured through books, thoughts of the future danced through his head. A future that consisted of one day rocking a mic in Prospect Park. The very park his was now rocking! Or so the story goes. Can someone fact check this please? Even if it's not true, and something tells me some of it is, the story connected with most and accomplished its modest goal.[Angry Citizen]

Tickets are on sale for Devin the Dude and Del The Funky Homosapien's CMJ show at BB King's. More news, downloads, videos, and tour dates below... 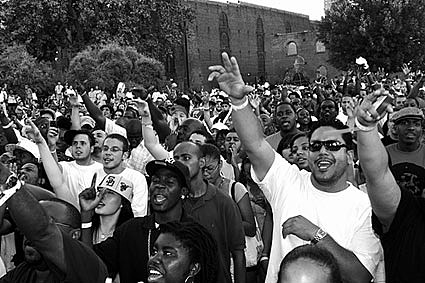