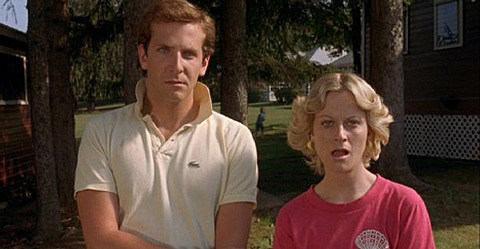 The film Wet Hot American Summer came out Summer 2001 and didn't do much at the box office but had cult hit written all over it. A satire of '80s summer camp movies, it was written by David Wain and Michael Showalter of The State and featured most of the rest of that comedy in the cast. It also starred a lot of folks who'd soon be a lot more famous -- Paul Rudd, Bradley Cooper, Amy Poehler, and Elizabeth Banks, to name a few -- and featured songs by Shudder to Think's Craig Wedren. You probably know all this.

Director David Wain, and pretty much all of the original cast (including Cooper, Rudd, Pohler and Banks), are going back to camp for an eight-part miniseries, subtitled "First Day at Camp," that will air on Netflix this summer. Also appearing on the new series: Chris Pine, Jon Hamm, Kristen Wiig, Paul Scheer, Rob Huebel, John Slattery, and Jason Schwartzman. And probably more. They just debuted a trailer for the miniseries, which doesn't show much beyond the names of the castmembers, but you can watch it below.