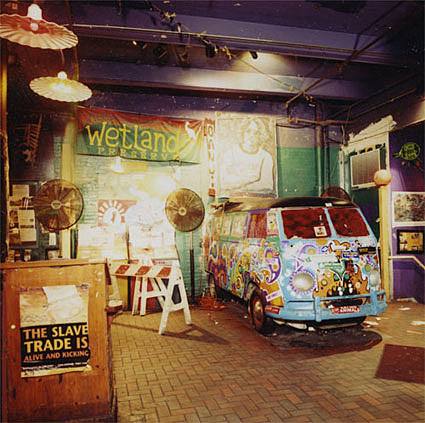 Archival footage, soundboard recordings and the work of a dozen digital animators help to relate the story of celebrated Tribeca nightclub Wetlands Preserve, which fostered the music of the Dave Matthews Band, Phish and Ben Harper while simultaneously supporting a social and environmental activism center from February 1989 through September 2001.

The documentary is opening at Cinema Village in NYC on March 14th, and at Laemmle's Grande in LA on March 28th. More info, trailer & pics at the "Wetlands Preserved: The Story of an Activist Rock Club" website, and a related video & even more info, below...

Wetlands. For many the name evokes a spirit, a community, an ethos. People still rave about the time they first encountered The Dave Matthews Band, Blues Traveler, Phish or Pearl Jam at the legendary New York City rock club. Others never visited, but have seen the signature Wetlands bus in the Rock and Roll Hall of Fame or have listened to the celebrated live recordings that originated from the club's intimate stage. Still others participated in Wetlands' working groups for social and environmental advocacy and remain tethered to its influential Activism Center.

Yet while the Wetlands legend and legacy endures, a full account of its rich history remains untold. Even those who have a familiarity with the venue know only a fraction of the story. Prior to the opening of Wetlands Preserve in February 1989 as a self-styled "Eco-Saloon," the nightclub was already an anomaly. By the time it had closed in September 2001, it had become an archetype as well.

Vintage footage, original recordings and new digital animation tell the story of the celebrated nightclub in Tribeca New York. It traces the history of this venue and its denizens as they find their way, ultimately thriving as an independent nightclub that supports new music and providing a nurturing proving ground for talent, many of whom appear in the film. Wetlands Preserved presents the many facets of this unique, influential and progressive New York institution.

"This is not a nostalgia trip at all, but tells the story of a groundbreaking club with intelligence, spirit, great music and love. Go See it." - WOODSTOCK TIMES

"Watching Wetlands Preserved, it's hard not to appreciate the idealism and unbridled optimism of an activist nightclub that survived in New York City for more than 10 years before being beaten down by the one-two-three punch of Mayor Rudolph Giuliani, rampant gentrification and the collapse of the twin towers." - AUSTIN CHRONICLE

"More than offering eye candy or great shots of a young Dave Matthews and young Eddie Vedder of Pearl Jam, "Wetlands Preserved" tells a fascinating story and shows a unique perspective of New York City. The tale of this nightclub is placed in historical ...The interviews offer insight that might resonate with anyone who has a soft spot for the girders, grime and grooves that lie at the core of life in the Big Apple."
- POUGHKEEPSIE JOURNAL

"Digs into the intriguing elements of what made the Wetlands unlike any other bar, club or music hall. In many ways the eclectic enclave was unabashedly the hippie haven of its reputation. It can easily be called the CBGB's of Deadheads."
- AHSEVILLE CITIZEN-TIMES

"Wetlands garnered a reputation as a hippie haven in some media, but the distinction was far too limited for the true range of the club's shows. The documentary portrays founder Bloch as a club owner with the purest of intentions- the music. And improv of all kinds, be it hip-hop, punk, ska or jam bands, flourished."- SUMMIT DAILY NEWS