The WFMU Record Fair is this weekend (May 30 - June 1) at the 69th Regiment Armory in Manhattan (25th & Lex). They've released their live performance schedule that includes sets by Dan Melchior, Laura Cantrell (who used to have a show on WFMU), UK band The Flatmates (in for Popfest), a high-concept Pere Ubu cover band, and more. Full schedule and details are listed below.

Admission to the WFMU Record Fair is $7 per day or you can pay $25 which gets you early admission on Friday (5/30) and lets you in all three days. If you want in for less, you can get $2 off admission with a BrooklynVegan coupon, found below. Either print it out or show on your mobile device to redeem. 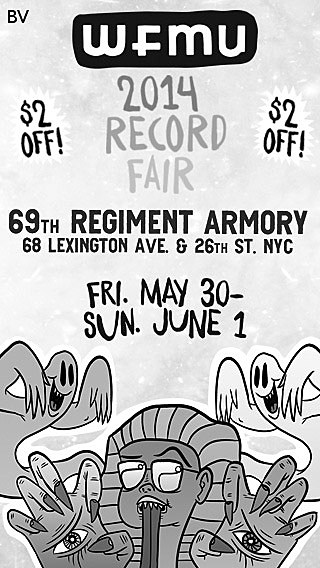 7-8pm: Put The Needle On The Record with Billy Jam
Live broadcast from Fair, with guests DJ ALF and Homeboy Sandman

3pm - 6pm: The Cherry Blossom Clinic with Terre T
Live Broadcast from Fair, with performances by Dan Melchior (3:30) and The Flatmates (4:30).