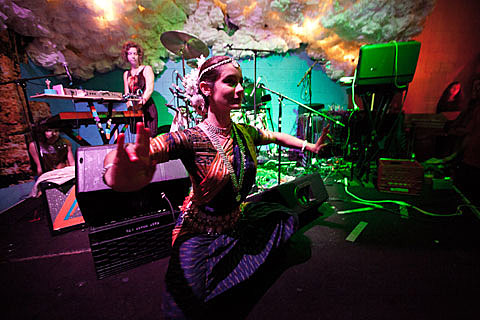 If you nerd out on vinyl as much as I do, then you might take a step away from all of this CMJ nonsense to pop in to the WFMU Record & CD Fair at The Metropolitan Pavilion (125 West 18th St in Manhattan) which kicks off on Friday (10/24) at 4PM (for early admission) and lasts through the weekend. In addition to killer records, crucial trades, and melted Mastercards strewn across the fair's 30,000 square feet, the annual WFMU Record Fair will also have video, live broadcasts, and live music with names like Prince Rama, The Hamburglars, Ted Leo, Butts, Fabulous Diamonds, Dan Friel, and others among the performers. Full details are below.

Besides the WFMU show, Prince Rama also has SIX other NYC dates, four during CMJ and two that aren't. Their CMJ week will kick off at Cake Shop tomorrow (10/20) as part of the Terrorbird CMJ show with Marnie Stern, Baths, Revolver, Dale Earnhardt Jr. Jr. (who just played Conflict of Interest), Kyle Andrews, Botany, Dark Dark Dark and Kordan. Later that night the Brooklyn Trio will be at Don Pedros for one of the many Impose Magazine parties, this time at Don Pedro's with Woodsman, Lower Dens, Talk Normal, Prince Rama, PC Worship, and Ancient Ocean. Thursday (10/21) will see them at Cake Shop for the previously discussed Carpark / Paw Tracks CMJ Showcase with Deakin, Light Pollution, Dent May, Excepter and others. And finally, on 10/22 Prince Rama will play the night show at Death By Audio with Greatest Hits, Woven Bones, Teen Inc, Excpeter, John Maus, and a DJ set from How To Dress Well.

After CMJ, Prince Rama will join Neon Indian & Apache Beat for a show at Brooklyn Bowl (10/29, tickets), followed by The New Museum on 12/10 where the trio will again accompany Deakin of Animal Collective (tickets).

All Prince Rama and Ted Leo dates, some video and set times for all known and previously mentioned parties (including the big Impose flyer) are below.

Ted Leo and the Pharmacists - "The Mighty Sparrow"

Starts at THE WOODS at 7pm

McCarren Park
Weekends vs. Battlehooch acoustic in the park - 7:30-8:30 pm

Visuals in the A / V Lounge:
- Teen A Go Go
- Bedazzled.tv's Medley Mania
- The Wild and Wonderful Whites of West Virginia
- Hausu (House)
- The Weird World of Blowfly, plus Q&A with the director

A limited number of vendor tables are still available, so if you are interested in selling, contact Dave Cunningham (201-521-1416, x236). See you there!