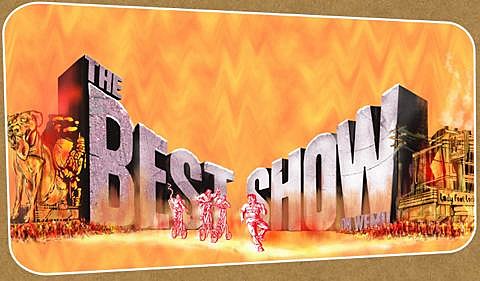 Ladies and gentlemen, last night the great Tom Scharpling announced that he will be shutting down the venerable Best Show on WFMU radio show after 13 incredible years. At the tail end of last night's episode Tom dropped the painful and, to many, literally tear-inducing shit-bomb of an announcement to his legions of admirers that The Best Show will cease transmission forever more after the December 17, 2013 installment. Tom has threatened a Best Show shutdown several times over the years; sometimes petulantly, sometimes jokingly. But there can be no mistaking the earnestness of last night's declaration. Most people who didn't hear the news live last night most certainly heard the news from Splitsider who seemingly broke the story first. Splitsider summarizes:

For the uninitiated, The Best Show is a weekly comedy/music radio show that Tom Scharpling started out of New Jersey in October of 2000 before the program grew a devoted international audience thanks to it being released online in podcast form. Clocking in at three hours each week, Best Show finds Scharpling taking listener calls, playing music, doing popular pre-written bits with his comedy partner Jon Wurster, and playing host to a slew of comedy and music elite as guests like regulars Patton Oswalt, Aimee Man, and John Hodgman.

Tom Scharpling is one of my personal heroes, most notably for his role as one of the key figures in bridging the gap between comedy and music. And the bits he and Jon Wurster spawned are without exaggeration some of the funniest moments of comedy I have ever experienced in any environment. I simply don't have the brain power to adequately tell you how important a show The Best Show is and on how many different levels it has played a role in the evolution of music and comedy. It's insane. And he did it all for free. And I am a card carrying Friend Of Tom and listen to his show as religiously as I can. Call-ins are a huge part of the show, yet I've never indulged. With 7 shows left, it seems I must surely seize the opportunity and make myself heard at least once before he's gone.

Meanwhile, while Tom says goodbye to radio, let's not forget that he is one of the more sought after music video creators of our time. He's also working with BV favorite Chris Gethard for something they're developing for IFC. Tom's future is wide open, and I predict only a preposterous amount of success.

Below find one of my favorite Scharpling and Wurster bits turned into a great song by Klaus favorite Ted Leo.