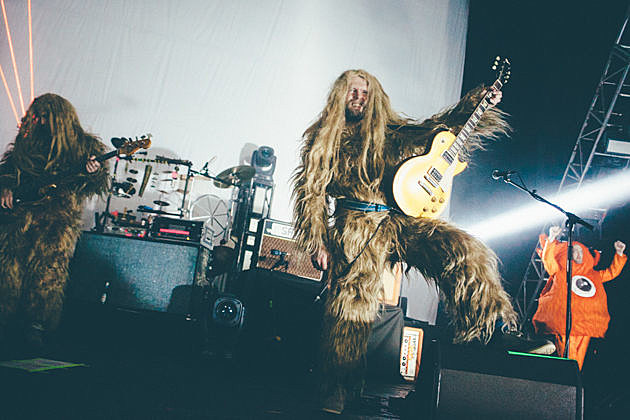 4Knots Festival w/ Super Furry Animals, Stephen Malkmus, Mikal Cronin, Twin Peaks, Screaming Females & more @ Pier 84
The Village Voice's annual outdoor festival isn't at the Seaport this year, and it isn't free either, but it does have the first US show from Welsh greats Super Furry Animals in six years and Stephen Malkmus which is enough to justify the $25 ticket alone. But you also get Mikal Cronin, Twin Peaks, Screaming Females and lots more. Starts at noon...and SFA are playing a full set, if you're wondering.

The New Pornographers, Thao & The Get Down Stay Down @ Prospect Park
There are probably a number of folks who are torn today between SFA/Malkmus and seeing New Pornographers. While Carl Newman and crew have been through NYC a few times in the last year, this show is free... and in the lovely, wooded Prospect Park.

Rainer Maria, Softspot @ Shea Stadium
Rainer Maria put out a number of great emo/indie rock albums on Polyvinyl back in the late '90s and early '00s, but then broke up in 2006. Earlier this year they reunited at Bowery Ballroom, and this week they play two more hometown shows. This is the second.

Rosetta, So Hideous, No Way, Descender @ Saint Vitus
Rosetta's newest album Quintessential Ephemera is their first with Eric Jernigan of City of Ships as an additional member, and it brings some new sonic territory into their atmospheric post-metal/post-hardcore mix. It's good stuff.

The Rezillos, Gameday Regulars, The Purslaines, Whiskey Bitches @ Gramercy Theatre
UK punk/new wave vets The Rezillos released ZERO, their first album since the '70s, back in March which found the band still in fun form. But expect to hear classics like "Top of the Pops" tonight too.

The Men, Honey, Junk Boys, Red Dawn ii @ Silent Barn
The Men progressively shifted from a punk band to a jam band, and lately members have either spent more time with other projects or left the band all together. We're not entirely sure how any of that will play into what they have in store for us tonight, but there's only one way to find out.

Dale Watson & His Lone Stars, Jason D. Williams, CatEyEs @ Bowery Ballroom
"Austin's answer to Johnny Cash", Dale Watson released his new album, Call Me Insane, in June. It's the latest in a long and prolific career that's had its joys and sorrows. The Johnny Cash comparison is apt, with a deep resonant voice, honky-tonk sound, and an abundance of truck-drivin' songs. Saucy duo CatEyEs open.

Prince Rupert's Drops, Tamarron, The Due Diligence, Edith Pop @ Cake Shop
Local psych rock band Prince Rupert's Drops headline this show but Austin's Tamarron are worth checking out too. Their album dadrock is loaded with hazy guitar pop that your father may or may not like. Stream it below.

Warped Tour @ Jones Beach
We don't actually recommend going to this, but if you're getting dragged there by a friend or family member... well we feel sorry for you. But also, you could make your day kinda better by catching post-hardcore band Citizen and Canadian punks PUP and The Dirty Nil.