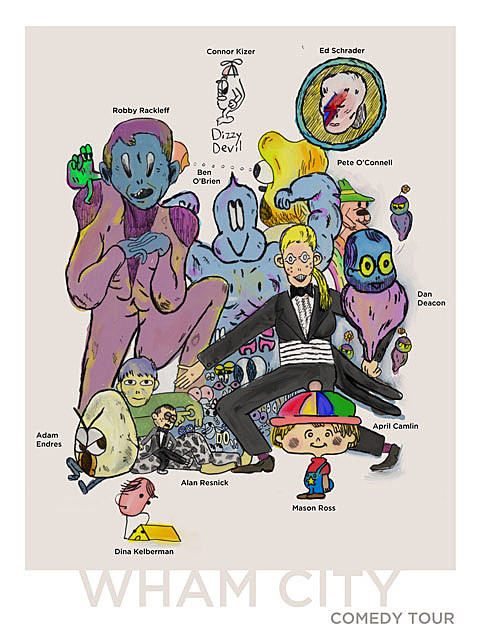 The show is a broad hybrid of things, over 20 acts of stand-up, skits, music, and a very broad "other."

Kizer, playing the archetypal patient, but being asked to peer into his doctor's very, very exposed asshole.

Dan Deacon reworking the audio from a particularly choice segment of The Wizard of Oz backed by a building, anxious bassline to an effect as sinister as it is funny.

Performance artistist/ventriloquist April Camlin having a few very heavy existential moments: "What happens to me when we die?" asks her dummy.

Truth be told, the Wham City comedy tour is full of a ton of bleak, cutting stuff. Maybe that's another misconception about the group: that it's full of cartoon people that live cartoon lives. Watching nearly all of them do comedy, you can't shake the feeling that, funny or not, the collective's stacked with some seriously cynical people.

That description of the Wham City City Comedy Tour comes from a SPIN review of the Baltimore show. The tour ends in NYC at Showpaper 42nd Street Gallery tonight (11/20). Todd P's full listing for the show, below...