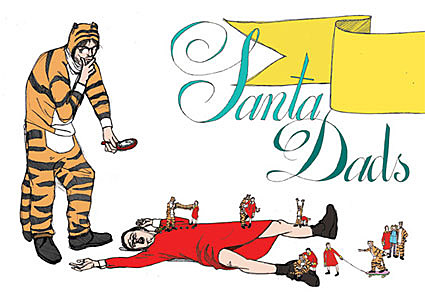 That Santa Dads picture up there was drawn by Wham City (Baltimore) artist Dina Kelberman. You see,....

Mostly now in their mid-20s, the members of Wham City came together at Purchase College, the arty wing of the State University of New York system, in the early part of the '00s......Dan Deacon and cartoonist Dina Kelberman had already met; Connor Kizer, a friendly, lanky goof who now beatboxes and sings for Santa Dads, lived just above Deacon in a Purchase dorm. While the crew would only really begin its incestuous collaborations once in Baltimore, Endres says it was already "making a shitload of noise for no reason in the middle of the afternoon," in communal houses and dorms across the Purchase campus. Shows were booked at house parties where rooms would end up wrapped in plastic or shit got set on fire. A lifestyle of noise and mess as art and play was developing..... [Baltimore City Paper]

featuring the likes of comedian Mason Ross, & conjoined twins of rock, The Creepers and Santa Dads! Upstairs early show 6pm - 9pm cuz i procrastinated! It's at Cake Shop! Also see that this mini-catalogue of the show will be available to buy! Oooh!

That's right, you can check out Wham City's own Santa Dads at Cake Shop tonight. Just don't expect a whole lot from them....