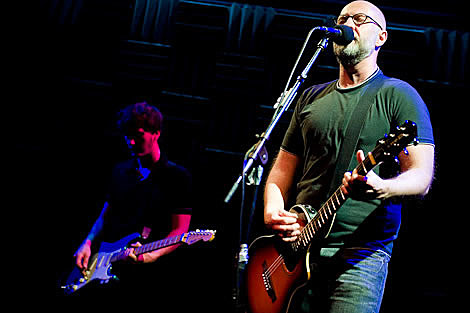 Last night (4/9), while some were enjoying (or not enjoying) a Passover Seder, others caught Bob Mould at his second of two shows at Joe's Pub. Anonymous wrote,

Unfortunately it was not an ideal venue tonight.
It could have been, but the atmosphere just wasn't the way most BM solo shows usually are.
Still not bad, and the audience was with him, but people were eating dinner....that's an ideal venue for Bob Mould?? I don't think so.

We have a review and pictures from the first night, HERE. Tonight (4/10), Bob switches it up a little and plays DJ (and maybe performs live?) at Highline Ballroom for his popular gay dance night Blowoff. (Tickets are on sale.)

Paper Magazine held their "Beautiful People Party" at Hiro Ballroom last night. Past musical guests at the annual get together have included Antony and Joanna Newsom (whose music is now featured in a bra commercial). This year it was Paper cover-girl Katy Perry who was already in town playing multiple nights at Irving Plaza and humping bananas.

Speaking of humping bananas, Chris Cornell played two shows at Webster Hall this week. In the YouTube video below you can see that he.... shaved his guitar player's head on stage while they were playing at one of them.

Also featured in Paper's new "Beautiful People" issue is comedian Aziz Ansari who co-stars with Amy Poehler in the TV show Parks and Recreation which premiered last night. Did you catch it? What did you think?

New Ditmas Park/Flatbush venue Sycamore hosted its third-ever live show last night. Check out the schedule for what they have coming up.

The Books paid a somewhat rare visit to NYC. The band, noted one showgoer, "debuted some sweet new tunes." Those'd be from the group's forthcoming record, which, according to the Columbia Spectator, is due next year. The Spectator also noted the lack of promotion for the show - which according to the Books' Twitter sold out less than a day before it happened. One student, on the minimal on-campus promotion, said, "I had no way of knowing they were playing at Columbia...I found out about the concert on a random music blog that I was casually browsing -- I don't even remember which site it was."

What did you do last night?