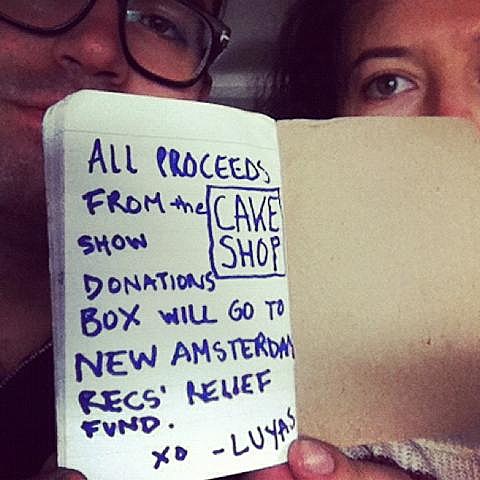 Power is back to most of Manhattan following four days of blackout in half the borough, with ConEd promising to have everywhere in the city back on by tonight and things are starting to get back to normal, though the Subways aren't quite there yet -- though the 4, 5, 6 and 7 lines are up and running. Current subway outage map is here.

Tomorrow's NYC Marathon is cancelled, though, as you probably have heard.

Here's our list of things happening or not happening in NYC on Saturday (11/3).

The Lower East Side early Friday evening and Cake Shop is open and tonight's free show with Montreal's The Luyas is on. Making it even more Canadian is Vancouver's Peace. The show is FREE and starts early (Luyas are at 8 PM) and there will be a donation box that goes to New Amsterdam Records' relief fund.

Later that night at Cake Shop (and not free) it's Home Blitz, and Watery Love.

As previously announced, Peace are also playing Pianos tonight at 10 PM and that's a free show too. on a diverse bill that also features Jennifer Stuart & the Design, Myra Flynn, and Randall Shreve & the Sideshow. (Peace play again at Death By Audio on Monday).

Next door, The Living Room is also back in business with James van Cuylenburg (of The Tealeaves), Chris Riffle, Deni Bonet and New Ponies.

It looked like Santos was going to be open for tonight Shiny Toy Guns, Colourmusic and MNDR show, but the venue just tweeted, "Due to complications in the wake of Sandy, we regret to announce that our events for this wknd are canceled. Refer to site for more info." Show has been moved to Monday, November 5.

Mercury Lounge is open but tonight's Anaka show has been postponed till December 2. The early show with Gangstagrass and The Newton Gang is still on.

Sunshine Cinema on Houston is open for business but the BV-presented screenings of Miami Connection have been rescheduled for next weekend (11/9, 11/10).

Bowery Electric is now actually electric again, but tonight's David Johansen show with Romans and Kay Kasperhausen has been postponed.

Joe's Pub is back in business and tonight they have Jack Hitt: Making Up the Truth.

Le Poisson Rouge's power is back on and tonight's FIXED show is happening with The Magician. This past Tuesday's cancelled Kitsune event with The Twelves and Yuksek has been rescheduled for Sunday, November 4th at LPR (New Moods are no longer on the bill).

Webster Hall has power and though there's no show in the main space tonight, The Studio will be open with Gallows, Barn Burner, For Sleeping or Jumping, and DeathThrob.

The Jefferson Starship show that was to happen at The Concert Hall at New York Society for Ethical Culture is being postponed to a later date TBA.
Metropolitan Talent reports:

Due to Hurricane Sandy related logistical challenges, the following concerts in New York City are postponed:

The Dethklok / All That Remains / Machine Head / The Black Dahlia Murder that was to happen tonight at Roseland has bee postponed till Dec. 14. TIckets will be honored. This is the 2nd Dethklok show in a row at Roseland cancelled or postponed.

Matisyahu at Starland Ballroom, like the two Social Distortion shows before it, is cancelled.

George Lopez's gig at Wellmont Theater on Saturday is postponed to 2/23/2013, and his Capitol Theater show will instead happen 2/22.

Maxwell's in Hoboken is still closed.

Meanwhile in Brooklyn, most venues are up and running.

Galapagos in DUMBO, which was ravaged by the storm, is back open tonight with Floating Kabarrette.

Free show at the Bell House in Brooklyn tonight with The Stompin Riff Raffs and Daddy Long Legs. The show previously cost money and had T Valentine on the bill.

The Rock Shop is open.

Littlefield is hosting a Stache Bash.

Savoir Adore and Slowdance play the Brooklyn Museum with Jarana Beat. It's a free show that begins at 5 PM.

The Brooklyn Botanical Garden is open and free.

Knitting Factory is having a benefit for the Rockaways with Vast Aire, The Kominas and more.

285 Kent will be pumping tonight to the sounds of Zomby, DJ Rashad, Massacooramaan, and J-Cush

Around the corner at Glasslands, it's Lazyeyes, The Doorbells, and The Midnight Hollow.

At Cameo tonight, they have Eyes Lips Eyes, Leverage Models, and Beast Patrol early, and then at midnight it's indipop dance party Mondo! NYC.

Landlady and Marble Fawn are at Pine Box Rock Shop

Paper Diamond are at Brooklyn Bowl.

Zebulon is open and wants you to dance. DJ Tropical Jeremy provides the music.

UCB West and East are open. The Pit too.

The Nets play their postponed first game of the season tonight at Barclays Center.