Cars floating in underground garage on Stone St. (via @wingedfeetxc) 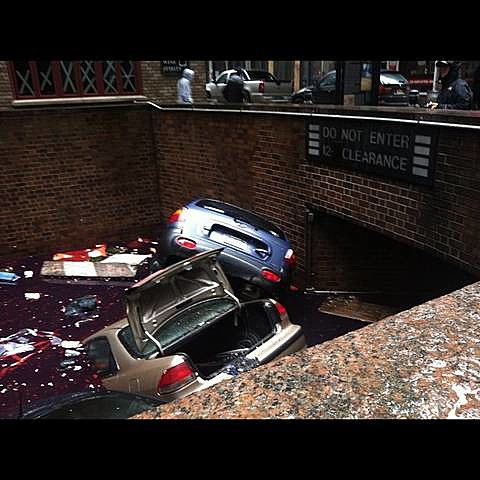 Almost every NYC area show on Sunday, Monday, and Tuesday was cancelled, and tonight (10/31) (aka Halloween) is looking a little better but still a large percentage of the shows are cancelled.

Tonight's Big Freedia show at Brooklyn Bowl is still on but opener Vockah Redu dropped off. Doors open at 6 PM and the show starts at 9 PM. Admission is free before 7 PM and after that it's $15-$20. UPDATE: Hess is More and Oh Land added to this show.

Music Hall of Williamsburg was only available for Aimee and Ted's show tonight because the Jackie Greene show is cancelled. Refunds are available at the point of purchase.

The Halloween shows in Williamsburg, including Glasslands' covers show, Death by Audio's covers show, and Cameo's free, weekly Big Terrific comedy (early) and The Hold Steady's Dan Neustadt and friends playing MIchael Jackson's Thriller (late), are still on. All door proceeds for tonight's Glasslands show are going to the Red Cross. Ted Leo tweeted he was gonna try and stop by Glasslands after Aimee Mann.

The Misfits annual Halloween show at Highline Ballroom is still on. No it's not. Update:: "The Misfits will go on, but not tonight. Due to weather complications, it is rescheduled for Dec 16th."

Murphy's Law at Trash Bar appears to be happening.

Acheron is open too with Author and Punisher.

The World/Inferno Friendship Society annual Halloween show at Warsaw is still on.

285 Kent, however, cancelled their Halloween show tonight. Organizer Todd P says, "We had to cancel Halloween, but it was not 285 Kent's decision; the organizers and bands involved [cancelled]. We would 100% do it and are pretty determined to book something else."

The Meter Men and other shows at BB King's appear to be happening.

Bad news from Dita Von Teese "Regrettably, all NYC StripStripHooray shows are cancelled. Tix will be refunded by LiveNation, & we will be back in early 2013. Thank you all for the support, we were so excited about these sold out shows! Stay safe, NYC! X." StripStripHooray was to have happened this week at Gramercy Theatre.

Wintersleep and Elliot Brood were supposed to play Knitting Factory last night, but are instead playing tonight.

The Pit is open.

The Halloween show at Union Hall with Dionne Werewolf and Hall-oween and Oates is still on.

Halloween at The Film Society at Lincoln Center is open.

The Halloween show at Goodbye Blue Monday with Snake Monsters, Scorpion Child, and The Biomechanic is still on.

As mentioned, Smashing Pumpkins at Barclays Center is cancelled.

As mentioned, the Halloween show at the Bowery Electric is cancelled tonight.

The Hess Is More Halloween concert at Mercury Lounge is cancelled. UPDATE: Hess is More and Oh Land are now playing with Big Freedia at Brooklyn Bowl.

The Halloween show at WEIRD with Bellicose Minds and others is cancelled.

The Halloween show at SOB's is cancelled.

The party at House of Vans is cancelled. They write, "Hallo-Wolfbat is cancelled. The house of vans got two feet of water inside. We are planning to reschedule for a later date. It could be up to a month. All the electrical, sound, and lighting was damaged. Please spread the word. I'll let everyone know the outcome. Looks like it may be a end of the world party in December. I'm sorry"

The Reckless Kelly show at Bowery Ballroom has been postponed.

The Halloween party at The DL with Designer Drugs has been postponed.

Le Poisson Rouge still lists shows for tonight as of this post, but has no power, so cancellations are likely. And actually, "We are sorry to report that Mondo Indie Dance Party Presents MONDOWEEN! is canceled tonight due to power outages from Hurricane Sandy. We wish you all a safe Halloween and a speedy recovery from the storm." UPDATE: LPR confirms they are totally closed.

A whole bunch of Thursday show are cancelled too.