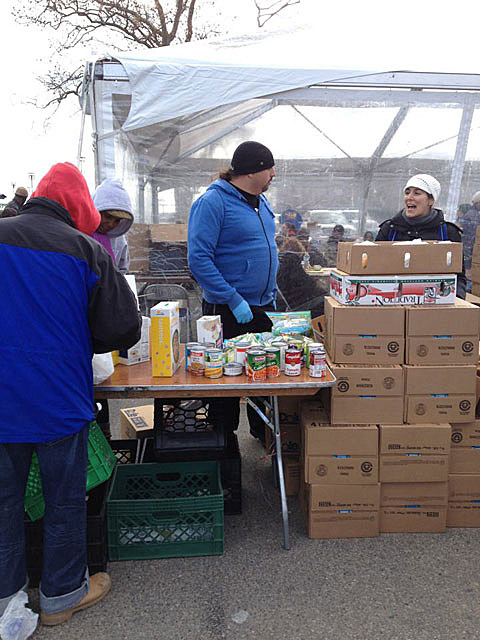 As we saw yesterday, the power is back to most of Manhattan and many more shows are starting to happen. Subways are continuing to get better too. Yesterday we mentioned that the 4, 5, 6, and 7 trains were back up, and now the J and F train are back too. Current subway outage map is here.

If you're looking for ways you can help out with hurricane relief, head to http://www.nycservice.org/.

Here's our list of things happening or not happening in NYC on Sunday (11/4).

As mentioned on Saturday, Peter Wolf's shows are cancelled, but City Winery is opening tonight for a NYC stand-up comedy benefit for Hurricane Sandy victims.

The Bell House had been open for a few days, but they just tweeted, "Blown transformer, fire under the street, no power on our block." They're moving the "Bare! True Stories of Sex, Desire and Romance" show to November 23 and are currently looking for a new location to do tonight's hurricane relief open mic.

Maxwell's, which is undamaged, finally got their power back, but unfortunately, "it came too late to enable [them] to host the Crooked Fingers/John Vanderslice show tonight," so that show has been cancelled. John Vanderslice and Crooked Fingers did play a pre-transformer explosion show at The Bell House on Friday (11/2), and as hinted, John did in fact wear his Tigger costume.

The previously discussed Samiam show is still on, and set to take off tonight at Saint Vitus (11/4) with guests Liquor Store and I'm With Cupid. Tickets are still available.

Mercury Lounge is open again and tonight's Fenster show with Howth, Norwegian Arms, and Steel Phantoms is still on. Tickets for that show are still available. Fenster were also supposed to play Shea Stadium and Muchmore's last week too but Sandy cancelled those.

As mentioned, the Molly Nilsson and Cat Martino show which was supposed to happen at Glasslands last Sunday (10/28) is instead happening at Public Assembly tonight with Amalie Bruun. Tickets for tonight's show are still available.

Bowery Ballroom is back up and Gary Clark Jr. plays his first of three shows there tonight.

Mossenek (featuring Mick Barr and Chuck Bettis), Yoshiko Ohara (of Bloody Panda), and Entartete play Death by Audio tonight. It's the first show ever for Entartete, the new project of Speck Brown (ex-Orphan) who formed the band after the tragic passing of Brendan Majewski. Flyer for the show is below.

Hannibal Buress, who couldn't make it to his weekly Sunday comedy show at Knitting Factory last week due to the hurricane, is back in action tonight.

UCB Theatre and UCB East are both open and UCB Theatre hosts their weekly ASSSSCAT 3000 shows while UCB East has a stand-up open mic at 5:30 PM, Indie Cage Match at 7:30 PM, Improv Nerds at 9 PM, and The Improv Nerds Jam at 10 PM.

Power is back on at The Stone in the East Village tonight (11/4) so look for a pair of shows including an early 8PM show with Victor Poison-Tete (of rat at rat r) and a 10PM show with Tamio Shiraishi and Cammisa Buerhaus.

Barbes opens this afternoon with the first of four events at the venue tonight. Two showings of Señor Calavera's JUST IN CASE, "an interactive image and music driven dramatization of the book Just in Case by Yuyi Morales, go down at 2:30pm and 4PM today, followed by a performance of The Four Bags at 8PM, Amour Obscur at 9PM and la Sabrosa Sabrosura at 10PM.

The Studio at Webster Hall is hosting Get Out the Vote with Patrick Toussaint, Mad Moiselle, Siya, Shamar Forte, and Wes Cyphers.

Union Pool is open and holding a hurricane benefit drive. They write, "We are holding a drive for our fellow New Yorkers in Staten Island Sunday November 4th from 1-6pm. This will be the first of many drives we hold for the communities affected by the devastation that is Hurricane Sandy." Head to Union Pool's site to see the list of items they'll be accepting.

Justin Walter and Ryan Ferriera will perform at Zebulon, which is open for business in Williamsburg tonight.

After returning to some sense of normalcy yesterday, Joe's Pub will host Public Forum Duet: Anna Deavere Smith and David Simon early and John Kelly later at the venue.

Bad Side, Holidays, The Guts and Pity Party are ready to take on The Acheron tonight.

Santos Party House was closed last night and don't have anything listed for tonight either, but Monday's (11/5) MNDR, Colourmusic, Shiny Toy Guns, and Static Summer show is still a go. Deidre & the Dark (Deidre of Savoir Adore) (who just played NYC) also plays Santos on Monday with Gin Wigmore. However, the Etienne De Crecy show is cancelled.

Cake Shop got their power back and hosted The Luyas and Peace last night, but they have nothing scheduled for tonight.

The Chick Corea and Stanley Clarke Band play The Blue Note tonight. A portion of ticket sales will go to the American Red Cross.

Tonight's Leslie West show at Iridium Jazz Club tonight has been postponed to a TBA date in January.

As mentioned yesterday, Rockwood Music Hall is back open.

Friday's David Choi and Clara C show at Highline Ballroom has been rescheduled for tonight. However, the Acoustic Africa Tour show has been cancelled. Refunds for that one are available at the point of purchase.

Monday's Joshua Radin and A Fine Frenzy show at Best Buy Theater has been rescheduled for tonight. All tickets will be honored.

Translator Audio and the associated South Sound studios/practice spaces, which were hit hard by Hurricane Sandy, have set up a donation area. Donate if you can.

Terrence Hannum of Locrian has a new zine available for order now. The zine, which is based on art inspired by the pentagram, comes with a cassette that is to be listened to while viewing the zine. Check out a video preview of the zine below. Locrian has a new split with Horseback out now via Relapse Records.

Joey Bada$$ was joined by The Roots for his late night TV debut on Late NIght with Jimmy Fallon on Friday. Check out a video of him performing "Waves" below. 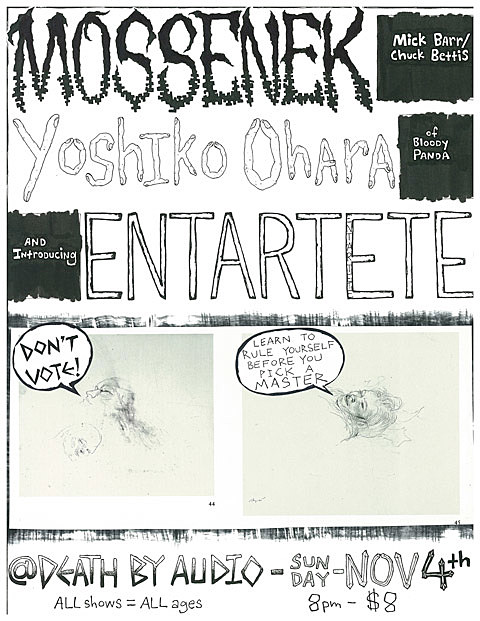