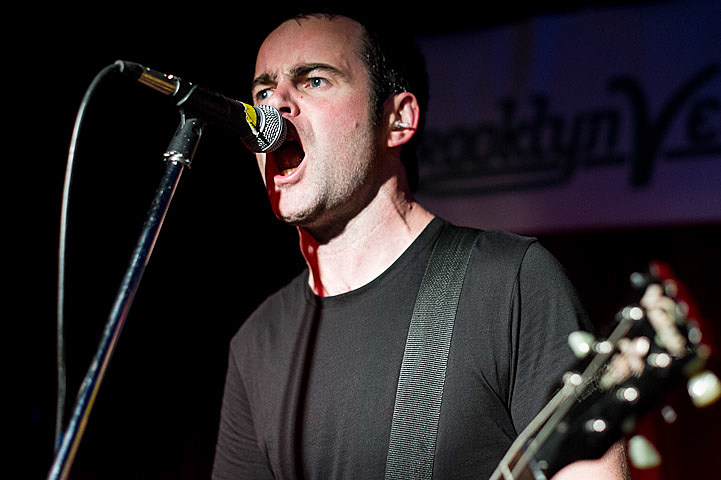 MS MR at BV-CMJ in October (more by Amanda Hatfield) 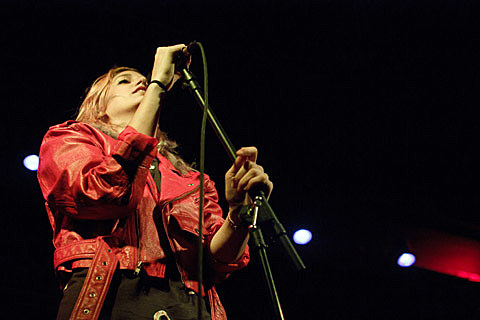 Though things are certainly getting a little better, much of NYC is still devastated by Hurricane Sandy (like Staten Island and Coney Island). Lots of people still don't have power and transportation is limited. Here's the list of shows that are and aren't happening in town tonight (11/2/2012).

The Grouplove show at Terminal 5, which MS MR opens is still on for tonight, but due to complications caused by Hurricane Sandy, the show will no longer be livestreamed on the Bowery Presents YouTube page.

The Hospitality and TEEN show at Bowery Ballroom tonight has been postponed due to lack of power. A new date TBA.

Crooked Fingers and John Vanderslice at The Bell House is happening.

For those with bored kids (as in real kids, not, like "the kids") in Williamsburg, Brooklyn Bowl is having a Family Day as we speak, with free brownies for bowlers.

At 6 PM, Brooklyn Bowl goes back to being 21+ with Particle playing at 8 PM and a late night dance-a-thon featuring The Fort Knox Five and the Funk Hunters starting at 11:30 PM.

Over at Cameo you can see strong>Apollo Heights, Backwords, and Fan-Tan. $10, more info here.

Tonight's Chris Isaak show at Beacon Theater has been postponed to November 11. All tickets will be honored.

The Sonar Fest Tour with Die Antwoord, Azari and III, and others was scheduled to hit Roseland Ballroom tonight, but that show has been cancelled.

Meanwhile, Andrew Jackson Jihad, Future of the Left, and Jeff Rosenstock (of Bomb the Music Industry) were supposed to play Le Poisson Rouge tonight, but that show has been moved to Europa. Tickets are available.

Tragedy (the tribute band) at Merury Lounge has been rescheduled for 1/5. Hollis Brown at Mercury Lounge will have a "new date soon."

The Adam Green and Binki Shapiro show at Maxwell's has been cancelled due to no electricity at the venue. Adam and Binki are still supposed to play Le Poisson Rouge on Monday (11/5).

Highline Ballroom had to cancel both of their shows tonight. The early show, David Choi and Clara C has been postponed to Sunday (11/4), and the late show, Maya Jane Coles, has been relocated to SRB Brooklyn (177 2nd Ave).

Our Miami Connection screenings are postponed.

The Bloody Beetroots show at Webster Hall has been cancelled.

The STS9 shows at Best Buy Theater for tonight and tomorrow both appear to still be on.

The Pearl Jam/Joseph Arthur side project RNDM show at Music Hall of Williamsburg is still on for tonight. David Garza opens all dates on the tour.

Cultfever, Blonds, and Kenji Urada play Glasslands tonight before Bear In Heaven and Small Black DJ a Hurricane Sandy benefit at the venue.

Your 33 Black Angels and The Archive play Zebulon.

The Smashing Pumpkins show at Susquehanna Bank Center would have happened tonight, but that show was one of the shows the band was forced to postpone.

UCB Chelsea is open but UCB East is still closed.

Fontana's opened with a generator last night (just as a bar, no show) and probably will do the same tonight.

Rockwood Music Hall is closed, and says "All tickets for tonight's Jaymay show will be honored at one of her upcoming two shows (11/9 or 11/16). Alternatively refunds are available by contacting MusicToday customer service at tix@musictoday.com or 1-800-594-TIXX (8499)."

Pianos is still closed, so no Luke Rathborne, Mon Khemer, Little Rader or Chris Bathgate, but Pianos promises they will open as soon as power goes on.

If you're at home., watch the telethon with Bruce Springsteen and many others.

Aerosmith still played the 'Today Show' this morning and Steven Tyler dropped the F-bomb. Video below...