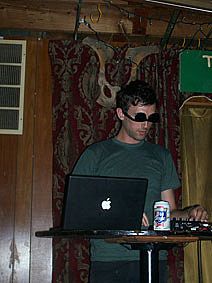 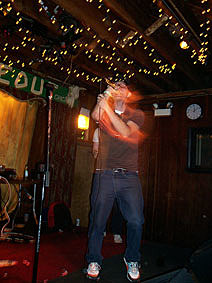 me: (to Jesse from Professor Murder) Would you like to play my late night "DANCE" party at 205 on Saturday October 20th?

Jesse: We actually have a side project called "King Oppression" that might be great. Basically we sing p murder songs over other people's beats. setup is a laptop, sampler, and two mics.

someone who works with P Murder: They did that at an afterparty I had during Pitchfork Festival and it was pretty awesome. Musically it's them doing all PMurder songs over rap and dancehall beats... instead of the full live instrument set it'd be drum machine, laptop and some live percussion. I'm sure you've heard their "Chinkuzi Riddim" version of "That's How They Getcha" (MP3 above). They played that and it is perhaps the best aural description of King Oppression. The crowd at the party here wouldn't let them leave without an encore so they played "That's How They Getcha" twice.