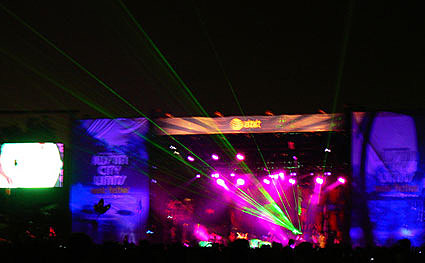 Bjork's big show at Madison Square Garden in NYC is tonight (Sept 24). The Klaxons are opening, and so is Santogold - which is BrooklynWhamCityConsistent with Bjork's choice of Spank Rock opening for her last time she was in town. And speaking of Spank Rock and Santogold, they're also both playing the Klaxons-MSG afterparty at Rebel, which (as David Bruno reported) is free if you RSVP. This is also a good spot to mention that the Klaxons are listing a Webster Hall show on October 12th which is "currently not on sale".

I'm supposed to go tonight, but should I? I just saw her at Austin City Limits (she headlined the first day), and probably because I was spoiled from going to all three of her last NYC shows (Radio City, United Palace & The Apollo), I had trouble getting into it (set list here). I was also tired (flew in that morning - was at festival all day), far from the stage, alone, supposed to already be at my own afterparty (which I had no idea how I was going to get to), and in a huge field with thousands of people. I guess I had trouble connecting with the show - like it was just this thing happening on a stage far away that I could sort of hear (I felt that way during Arcade Fire too) (wah, I know). You might have heard that a speaker caught on fire during Bjork's set which was the second fire that day at the fest.

Maybe sitting in a seat at MSG with stadium sound will be better. Do you want to go to tonight? The 30th person to e-mail BVCONTESTS@HOTMAIL.COM (subject: Bjork) will get a free pair of tickets. Include your first and last name. Tickets are also still on sale.