photo: Eyehategod at Europa in 2010 (more by Samantha Marble) 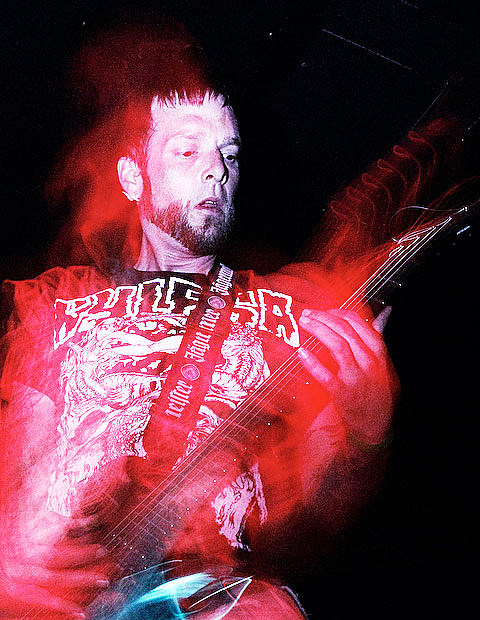 Eyehategod, Mortals, Blackout, Scowl @ Saint Vitus
Sludge legends Eyehategod are still touring in support of their excellent 2014 self-titled LP, and tonight the begin a sold-out 2-night stand at Saint Vitus. Different openers both nights, and they're all worth catching too.

The Movielife, Crime in Stereo, Pass Away @ Irving Plaza
Late '90s/early '00s Long Island melodic hardcore band The Movielife broke up in '03 after two albums of Lifetime/Gorilla Biscuits worship and a third album and EP that pushed that sound in new directions. They briefly reunited in 2010-11, and now they're thankfully back once again. Tonight's their first of two sold-out Irving Plaza shows with their pals Crime In Stereo. Opening this one is Pass Away (mem I Am the Avalanche, Crime In Stereo).

Porches, Frankie Cosmos, Krill, Sheer Mag @ Bowery Ballroom
Porches and related band Frankie Cosmos have been local staples for a while now, and their profile has clearly risen, as proven by tonight's sold-out Bowery Ballroom show, their biggest headlining appearance yet. They've got some talented friends to open, including quirky indie rockers Krill and classic rock-inspired garage rockers Sheer Mag.

Empire! Empire! (I Was A Lonely Estate), Warren Franklin & The Founding Fathers, Paper Streets, For Everest @ Palisades
Empire! Empire! returned last year with their first album since their 2009 debut, but now they're reissuing that debut and playing it in full on this tour. Warren Franklin just put out a split album with Kind of Like Spitting, and if you like KOLS, you'd probably dig Warren too.

Todd Edwards, Beautiful Swimmers, Bobby Renz @ American Museum of Natural History
Dance music veteran Todd Edwards has a long history, but he's been in the spotlight as of late thanks to collaborations with Daft Punk and associations with Disclosure. Tonight he DJs the ongoing One Step Beyond series at the Museum of Natural History, and Maxmillion Dunbar's duo with Ari Goldman, Beautiful Swimmers, open.

Jeffrey Lewis, Diane Cluck, The Spookfish @ Nola Darling
Two great artists with ties to the anti-folk scene, Jeffrey Lewis and Diane Cluck, begin a tour together tonight, their first of two NYC stops on the tour. It's sold out, but there will be a few tickets at the door.

Natalie Prass, Lady Lady, Small Wonder @ Rough Trade
Natalie Prass just picked up a ton of buzz (and a ton of Disney comparisons) for her debut album. Does she live up to the hype? Those with tickets to tonight's sold-out show will find out.

Algiers, Beliefs, The Flag @ Baby's All Right
London-via-Atlanta band Algiers make gothy/industrial soul, or soulful goth-industrial. If you're not sold on the recordings, word is Algiers, who just signed to Matador, are a see-it-live kind of thing. Also on the bill are Toronto's Beliefs who bring real muscle and songwriting chops to their brand of shoegaze.