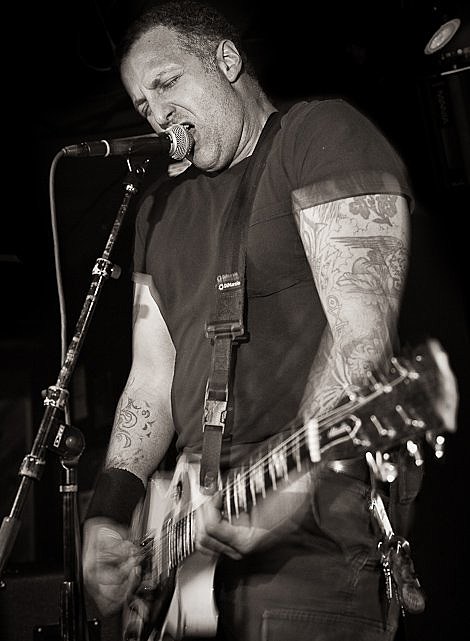 A lot to do today for a rainy Sunday at the end of a slow week.

Individual tickets are on sale today for the 2010-2011 NY Philharmonic concert season.

To make sure they don't get shut down, tonight's sold out H2O show happening on a Rocks Off boat is going to be dry ("Our First Ever NO BOOZE CRUISE - Straight Edge on the Hudson!"), which is ironic since those that step outside will probably not be dry at all thanks to the H2O coming down from the sky.

Good thing there's going to be a Pool Party on August 29th. Otherwise they would have went out on a rainy note. If it doesn't get cancelled, Chromeo, The Suzan, Telephoned, and previously-known-as "Special Guest" Kid Sister play the free show at the Williamsburg Waterfront today.

Today is the day The Specials were supposed to play in the rain at Central Park Summerstage.

Though there are still free events, there are no more free concerts on Governors Island this summer, which means tonight's potentially-soggy Diddy fans paid for their tickets. Same situation for the Jonas Brothers fans at Jones Beach.

Two indoor options today include "Farm to Folk Fest" at Union Pool (3-8pm) and "My Endless Summer" at Don Pedro from 4pm to 4am. Flyers and more information for both below... 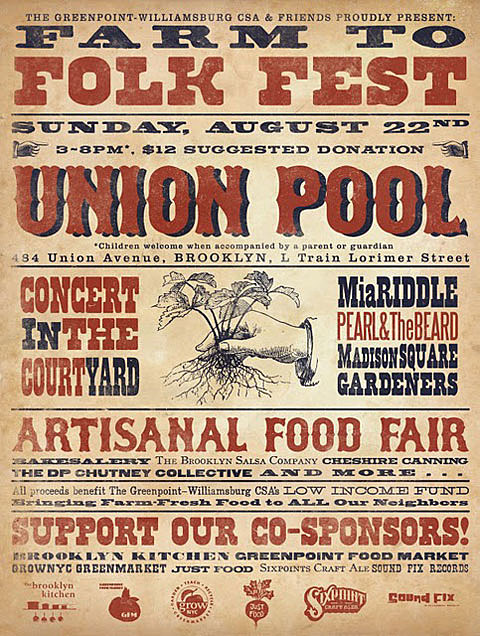 BROOKLYN, NY (August 5, 2010): The Greenpoint-Williamsburg CSA (GWCSA), a local farm-share organization, will be hosting the 1st annual Farm to Folk Fest, a benefit concert and artisanal food fair that will be held at Union Pool on Sunday, August 22 from 3:00pm-8:00pm. The GWCSA was started in 2000 with the mission to establish and maintain connections between local residents and local farms as well as to foster more sustainable ways of eating and living. Farm to Folk will raise money for the GWCSA's Low Income Fund, an initiative started in 2009 to provide access to farm-fresh organic produce for our neighbors who can least afford it.

Three local and sustainably conscious alt-folk bands-Mia Riddle, Pearl and the Beard, and Madison Square Gardeners will be donating sets and performing in the outdoor courtyard of Union Pool. Aaron Tasjan of the Madison Square Gardeners says, "We feel strongly that people all around the world can do a lot more to learn about the importance of what we're eating, how can it affect us in our everyday lives and why it's important to be aware of these issues. Issues dealing with farming, how farming fits into America's current cultural climate as well as its future, are very near and dear to our hearts."

The benefits of the GWCSA's Low Income Fund are many: it helps put food dollars in the hands of farmers who have our environment's best long-term interests at heart, ensures the recipients will receive fresh regional produce, and cuts down on the community's "food miles" - transportation costs from the farm to plate. As Mia Riddle of her eponymous band points out, "It's a really hopeful time to be involved in food in New York. Spreading awareness of local options, and making good food available to everyone, especially low-income people, is going to be a huge engine for change in this city."

Set times are as follows: Mia Riddle-6:30pm, Pearl and the Beard-5:00pm, Madison Square Gardeners-3:30pm. DJs will be spinning in the front room.

Farm to Folk will also feature an artisanal food fair with local vendors set up in the courtyard of Union Pool in the spirit of a mini farmers' market from 3:00 - 8:00pm. As of press date, vendors include: Bakesalery, The Brooklyn Salsa Company, Cheshire Canning, and The DP Chutney Collective. 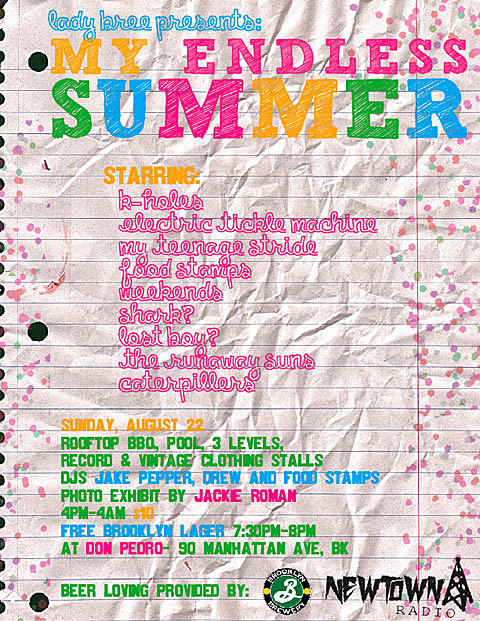 "Lady Bree Presents My Endless Summer! End of Summer blow out party today at Don Pedro, from 4pm to 4am. Ten local buzzed about bands, three DJs spinning rock, punk, postpunk etc between bands and until 4am. Rooftop BBQ from 4:30pm with veggie burgers, cheeseburgers and hot dogs. An actual pool in the basement you can sit in and sip cheap beer. Clothing and record stalls from Mystery Train Vintage and Killer Diller Records. Free Brooklyn Lager, Pilsner, and Pale Ale from 7:30pm-8pm, and $2 for the rest of the evening. Lets see summer out with a bang."