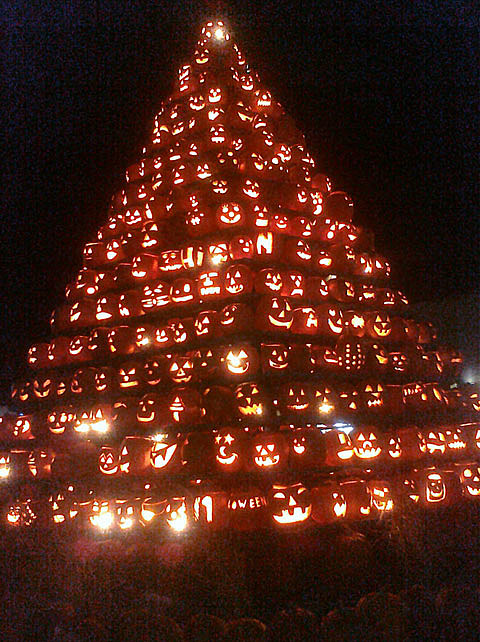 Twenty years ago the iconic Day of the Dead puppets first appeared in the Village Halloween Parade, our festival of All Souls to ritual traditions worldwide -the Guede in Port-au-Prince, the Skull and Bones Gang of New Orleans, in the calaveras of Oaxaca, the Midnight Robbers of Trinidad, and beyond. Often it is in the places where tragedy is more ubiquitous and everyday existence can be more of a struggle, that expressions of the Dead are the most exuberant, a reminder that life itself, despite itshardships, is a gift. The Dead - as they return to drink coffee, play checkers, watch TV,but above all, to dance - offer us a mirror to see with fresh eyes the everyday things in our lives, rendered invisible by routine. Every sound, action, and motion we take for granted, they rejoice in - on the one night they can. So each year, when the skeletons take their place at the head of the Halloween Parade, they are not grim expressions of the morbid but rather joyful reminders of all that is vital.

As the beloved dancing skeletons enter their third decade in the Village Halloween Parade, we seek to honor them - and in doing so, to honor all those who have walked in their footsteps. Official Parade puppeteers Superior Concept Monsters, Master Puppeteer Basil Twist and Haitian Artist Didier Civil plan to work with the Mexican, Haitian and arts communities to make and remake, create and re-create, re-envision and resurrect the entire Day of the Dead section, calling forth not only the spirits of the Dead, but many of the puppets of past VHP artists that had long been absent from the streets of Greenwich Village. Drawing on traditional forms from Trinidad to Tibet, Haiti to Mexico, new 12'-foot tall skeletal puppets will add new life to the VHP's jubilant underworld - a cortege drawn by galloping night-Mares, an illuminated Ghost Train, and a dozen brand-new dancing Calaveras skeletons and who knows what else to join their brethren at the head of the Parade.

As the perennial community of Halloween volunteers gathers again this year to build and rehearse our memento mori ("Remembrance of Death") we'll look back on 37 years of Halloween in NY with another Latin adage: "Vita Brevis Ars Longa" : life is short, but art endures.

Also check out the previous post (and its comments): "What's happening on Halloween weekend in NYC this year?"

The Voluptuous Horror of Karen Black was supposed to play Santos Party House, but the venue is closed.

Did you catch Legendary Pink Dots at Le Poisson Rouge the other night? Since their tour was announced, they were also added as opener for tonight's Dresden Dolls show at Irving Plaza.

That Dresden Dolls show also promises "special guests, rare performances, and a cacophony of Brechtian entertainment." AND: "This triumphant return will be documented by the Dresden Dolls fan base in a project spearheaded by This One Is On Us. Fans from all over the world will record, edit, design, and promote to produce a DVD of the evening for all the world to cherish and enjoy. This project aims to blur the link between author and reader even further - until both are one and the same."

HALLOWEEN
8PM $5
DAMN! a Halloween tribute to WHAM!
(Max and Kev from Pizza Party on EVR)
THE CURE(Warm Ghost)
VIOLENT FEMMES(McDonald's)
ELO(Members of The Mad Scene and The Flaming Fire)
DANZIG/MISFITS(Members of Love as Laughter, Children, and Violent Bullshit

Check out Howlies' new Halloween-friendly video for "Zombie Girl" below...