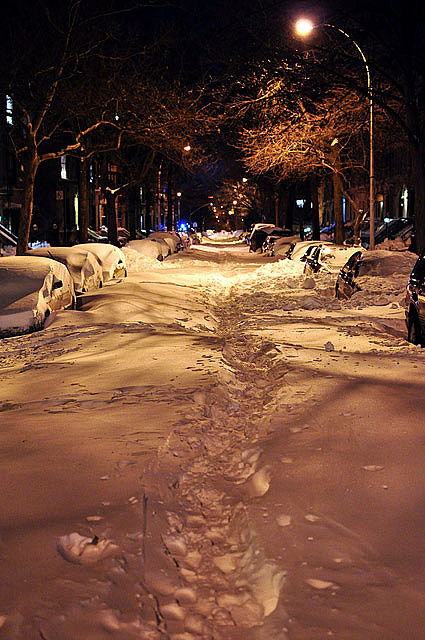 Estelle's show at Best Buy Theater is cancelled, but I think it was cancelled before it snowed.

Tonight's Jaguar Stone show at SOB's has been postponed.

Almost everything that was supposed to happen yesterday was cancelled, so call ahead to make sure tonight's show is happening.

The Bouncing Souls are supposed to be playing their third show in a row tonight at the Stone Pony, but they haven't even played one yet, and as of 11am they're still not sure if tonight's will happen either:

As of this moment (11am) the streets surrounding the Stone Pony remain unplowed.. We have hired private plow people to come dig out the area.. And are therefore hopeful the show will go on.. But it is too early to call as of yet. Please stay posted... As for our grandiose extracurricular activities...we are not able to have any of the afternoon fun today :( Cookman Avenue is a mess and we don't want to add to it. The movie at The Showroom ("Repoman") is postponed to Thursday at 4pm...Lenny Lashley will now play at the afterparty at the Asbury Lanes on Wednesday... Photos with Santa will still happen at the Wednesday afterparty but not at the art gallery today... And the special "Ghost Tour" is canceled but they offer them all year round at the Paranormal Bookstore so you should go next time you are in our fair city... Fingers crossed, I'm going over to the pony soon to start digging!!!

Some good news...P.E.D. is replacing A.O.D. on the rescheduled Thrusday show!

-K8 (aka The Blizzard Wizzard)

Lady Lamb the Beekeeper was supposed to play Rockwood Music Hall tonight, but has cancelled due to illness.