Deerhoof in Boston in October (more by Benjamin Lozovsky) 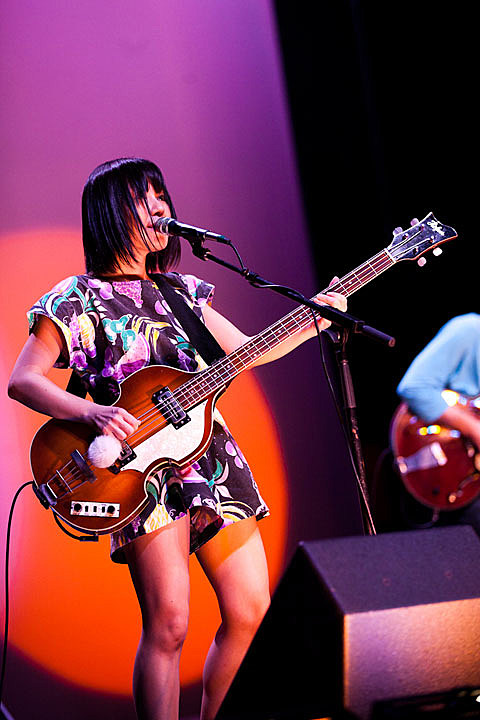 Twi the Humble Feather return to the stage this evening, Tuesday, 2/8. Catch them at Rockwood Music Hall. They go on at 11pm on Stage 1, an hour after Chris Thile starts on Stage 2.

Twi also have a gig scheduled for March 31st at Joe's Pub with Brooklyn quintent Build who will be celebrating a CD release that night.

Speaking of Joe's Pub, Henry Rollins kicks off his 50th birthday celebrations at the NYC venue this evening. I thought tickets were totally sold out for all five night, but as of this writing they seem to be available for three of them.

Jennifer O'Connor's Rock Shop residency continues tonight. Charles Bissell will be there and this is what he wrote about it:

Charles will be playing a little differently solo (than the usual loop-happy set, hidden behind a veil of electronics and studio trickery), as part of the wonderful Jennifer O'Connor's new monthly "Tower of Song" series at the Rock Shop in Brooklyn on Tues. Feb. 8th. Also on this one are the equally estimable Richard Baluyut (of Versus) and Kendall Meade (of Mascott).

It's sort of a round-robin affair with all four onstage, each playing their songs in a row, maybe talking a bit about them etc...

Then there's a homework assignment for each performer to write a new song based on a theme (this Tower of Song's theme is an anti-Valentine's Day or anti-love song, mostly due the early Feb. show date).

Additionally, each will be covering one of the other's songs.

Yikes, Charles will probably be closer to a Tower of Unpreparedness and copying of the paper of the singer next to him.

Don't for get that Deerhoof's show has moved to Europa. Check out their new video for " Super Duper Rescue Heads" below....