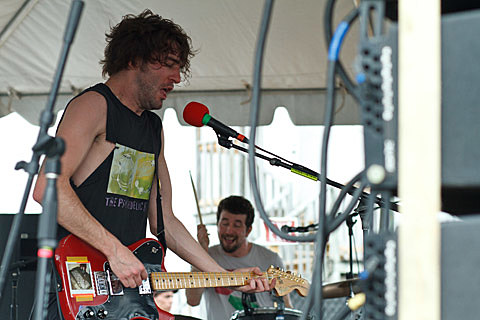 Tonight's Rooftop Films screening takes place outdoors across from BAM (Fulton Street and Ashland Place, Brooklyn, NY 11217) and is Rick Alverson's The Comedy which stars Tim Heidecker, James Murphy and Neil Hamburger(!). Musical guest for the night is Vacation Dad. The event, part of the ongoing BAMcinemaFest, will also include a Q&A with Rick Alverson, Tim Heidecker, and Kate Lyn Sheil. Tickets are still available.

Tame Impala posted a video teaser for their new album, Lonerism, which you can watch below.

You've probably heard about Lana Del Rey's "National Anthem" video where she and A$AP Rocky play Jackie O and JFK. It premiered today and you can watch it below.

You can also check out the video to SpaceGhostPurrp's "Osiris of the East" below.

For those staying home tonight, Zola Jesus will be performing with El-P on Conan tonight.

The Who's John Entwhistle died ten years ago today. See him in his prime -- you can stream The Who's entire 1970 Isle of Wight concert below.

The Marc Ribot Trio plays their second show in a 6-night run at the Village Vanguard tonight. If you can't make it, NPR will be streaming tonight's show.