The xx at Rock Werchter 2012 (more by Tim Griffin) 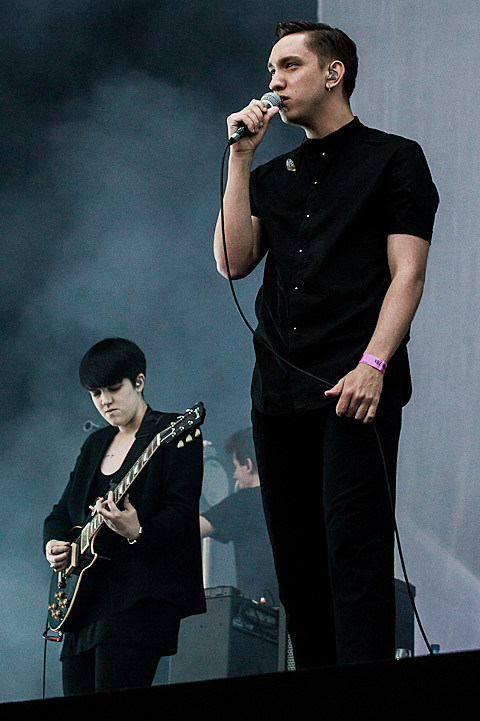 "Donnie Darko" screens in Tompkins Square Park. Show up early for free pizza from Two Boots who are celebrating their 25th anniversary at this, and at an upcoming show in East River Park.

"Wet Hot American Summer" screens for free in Brooklyn Bridge Park. Look for the film's co-writers Michael Showalter & David Wain in the crowd. The Stella/State cast-mates are both NYC residents. I mean, maybe they'll want to see it too. DJ Conquerrah will provide some tunes.

High On Fire were scheduled to play Music Hall of Williamsburg tonight, but cancelled their whole tour.

The Arts & Crafts-signed Canadian band Zeus are in town for two shows, starting at the Rock Shop tonight and continuing at Mercury Lounge tomorrow (8/3) with ARMS (tickets). The shows are part of a tour which brings them back to Canada to play Osheaga on Sunday (8/5).

Angel Haze has a new video for "New York," which you can watch below. Her next NYC show is on August 28 at S.O.B.'s.

Glen Hansard, Lisa Hannigan and John Smith covered The Band's The Night They Drove Old Dixie Down" for AV Club Undercover. Check out a video of that below.

Tamaryn have a new song, "I'm Gone," off their upcoming record, Tender New Signs. Listen to that below.

Teengirl Fantasy revealed the track, "EFX" (feat. Kelela), off their upcoming record, Tracer. Check it out below. Their tour hits NYC for a Rocks Off Cruise on August 23.