Godspeed You! Black Emperor in Brooklyn in 2011 (more by Greg Cristman) 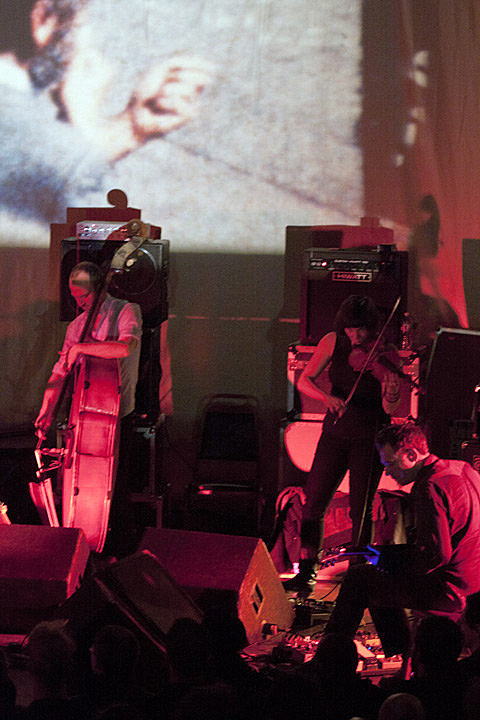 Fiona Apple was arrested in Texas for possession of hash, was forced to postpone her Austin show on Thursday (9/20) but made it to her Houston show on Friday (9/21). On stage at that show, she discussed the arrest. Read what she wrote and watch a video of it HERE.

ATP NYC wraps up today with Godspeed You! Black Emperor, Hot Snakes, Thee Oh Sees and more. You can check out pics of day 1 HERE.

There's a "special guest" at the DJ Rashad show at 285 Kent tonight.

If you can't make it to Metric's Radio City show tonight, you can stream it online.

NYC songwriter Alice Cohen, who sang in '80s new wave band The Vels and '90s alternative rock band Die Monster Die, has been keeping up a solo lo-fi career since 2008. She released her most recent solo album, Pink Keys, earlier this year via Olde English Spelling Bee. Catch her at Zebulon tonight.

R&B vet Bobby Womack performed "The Bravest Man in the Universe," "Jubilee," and "Whatever Happened to the Times" on Late Night with Jimmy Fallon on Friday (9/21) with help from Gorillaz/Blur's Damon Albarn, XL Records' Richard Russell, Kwes, TV on the Radio's Jaleel Bunton, and Remi Kakaba, all of who he performed with at Apple Store SoHo last Tuesday (9/18). Check out videos of those performances below.

Bobby Womack - "The Bravest Man in the Universe" on Fallon

Bobby Womack - "Whatever Happened to the Times" on Fallon