Miguel at MoMA PS1 in August (more by Leia Jospe) 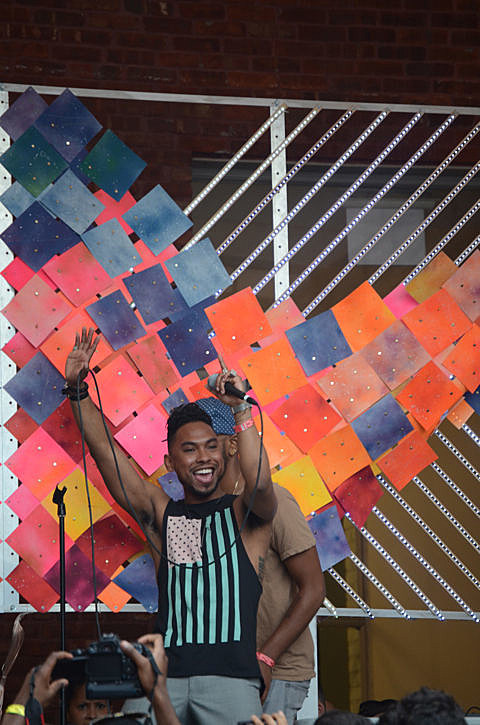 If you missed Dum Dum Girls at Europa last night, you have another chance to catch them today, and for free inside Other Music.

The one and only Bob Log III is on tour with Cheap Time and plays a show in Williamsburg at Glasslands tonight. Stop by and have a boob scotch or two.

First Kristen left, and now 'Hot Tub' is coming to an end. Tonight is the FINAL HOT TUB WITH KURT BRAUNOHLER! at Littlefield and the guests are Eugene Mirman, James Adomian, Marcus Monroe, and Nick Turner.

Speaking of, did you catch the season 3 premiere episode of Bob's Burgers after the Simpsons last night? If you didn't know, Eugene Mirman is the voice of Gene Belcher, Kristen Schaal is Louise Belcher, and last night's episode had Kurt on it too.

Miguel's album, Kaleidoscope Dream, is out this week (10/2) and he plays Bowery Ballroom tonight. If you haven't already, you can stream it at NPR.

NPR is also hosting the stream for the new Tame Impala album, Lonerism (due out 10/9 via Modular). You can also now pre-order the deluxe edition. The band's tour will hit NYC for two shows in November.

Pharoahe Monch posted the "trailer for DAMAGE off the forthcoming multimedia deployment PTSD presented by Pharoahe Monch & W.A.R Media. Damage is the 3rd installment of Pharoahe Monch's personification of the bullet. (1. Stray Bullet 2. When the Gun Draws)". Watch below.

Bat for Lashes made a video for the song "All Your Gold" off of her upcoming album, The Haunted Man (due out 10/23 via Capitol). Check it out below.

Bat for Lashes - "All Your Gold" Official Video