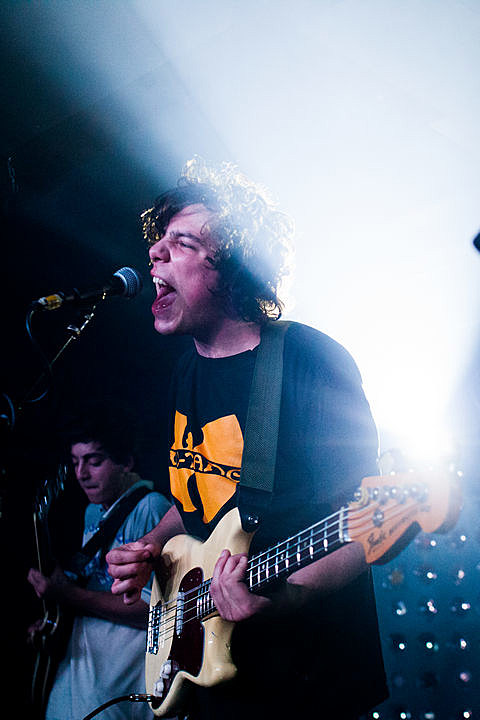 Sufjan Stevens, Moses Sumney @ Kings Theatre
Sufjan's newest album is his most bare-bones release yet, and with its lyrics mostly centered on his mother's death, it's his most depressing too. This is his last of three NYC shows on his current tour.

Spandau Ballet @ Beacon Theatre
Best known for syrupy '80s ballad "True," Spandau Ballet were originally of the artier bands in the UK New Romantic movement. The original lineup -- including brothers Gary & Martin Kemp -- are back together and touring for the first time in ages. Also recommended is Spandau Ballet doc "Soul Boys of the Western World" which is currently showing at IFC Center.

Twin Peaks, White Reaper, Honduras @ Music Hall of Williamsburg
Chicago's raucous Twin Peaks tend to whip crowds into a frenzy and tonight will likely be no exception. This is the second night at MHOW in a row for Honduras who last night opened for Blur.

Life of Agony, Heavygrinder @ The Wick
Life of Agony haven't played NYC, let alone Brooklyn, in a very long time, but after returning last year for a NJ show with Mina (formerly Keith) Caputo on vocals, they're finally ready to do it again this week. Tonight's their second show at The Wick this week.

WFMU Record Fair @ Brooklyn Expo Center
Calling all crate-diggers: the annual vinyl fantasia hosted by WFMU moves across the East River this year into the brand new Brooklyn Expo Center. In addition to all the used wax, there are live perforamnces and beer and snacks. You can get two bucks off admission with our coupon.

Turn To Crime, Baby Birds Don't Drink Milk @ Union Pool
Turn to Crime, the current band of Derek Stanton (formerly of Awesome Color), make music that ranges from antsy post-punk to somnambulistic torch songs to something you might call pop. But it all exists in Stanton's particular overcast universe, with his soulful, world-weary vocals pulling you from one song to the next.

Frankie Cosmos, No One & The Somebodies, Outside World, Memorial Gore, Marigolds @ Cake Shop
This is part of Cake Shop's 10th Anniversary Celebration that's happening all month, featuring twee folk singer Frankie Cosmos, Chicago transplants Outside World and more. The venue is promising all sorts of surprises, so be prepared.

Empress Of, A/JUS/TED (DJ Set), Special Guests (DJ Sets) @ Elvis Guesthouse
Empress Of, aka NYC art-pop musician Lorely Rodriguez, will preview music from her forthcoming debut album for XL/Terrible with this five-night stand at Elvis Guesthouse. Tonight's the last night and who knows who the special guest DJs are. Seriously, any guesses?

The Baseball Project, The Gay Blades @ Rough Trade
Spring means baseball and that means The Baseball Project (Steve Wynn, Scott McCaughey and half of REM) are playing shows. Even if you only have a passing interest in America's Pastime, they're still a lot of fun. But being a baseball fanatic helps.