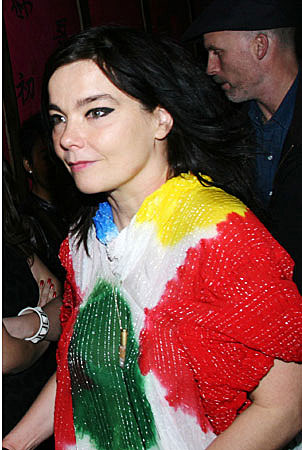 Apparently, New York City ranks fourth in the world in terms of population density, and it felt as if the whole city was crowded together at PAPER's Beautiful People party held at the Hiro Ballroom last night! Californian crooner and BP cover girl Joanna Newsom performed for the throngs of rabid fans. All in all, it was a great, young, crowded, fun, laid-back party, but then all of a sudden the pressure was ON when Bjork, notoriously anti-photographer, arrived. It was my mission to document her iconic presence at our party! And I fought like a Nimiean lion to do it. I got four frames -- pop, pop, pop, pop -- just like the champagne served that evening, courtesy of Nicolas Feuillatte. The icing on the cake? H&M provide a PAPER + H&M T-shirt for all guests which read "I am a beautiful person." [PAPER Magazine] 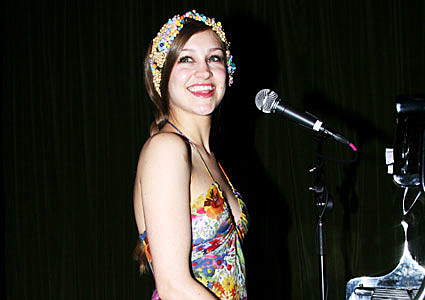 joanna newsom plays the worst show of her life at the hiro ballroom in NY tonight, april 2nd, 2008. But its not her fault...she sounded fine, but could barely be heard over the chatter of the "beautiful people (but ugly and shallow on the inside) party" via paper magazine and H&M. whatever. who am i to judge...[Tom Hayes]

A recent video of Helio Sequence on Jimmy Kimmel below. A video of Moby on Conan O'Brien in the Week in Dance (part 1).