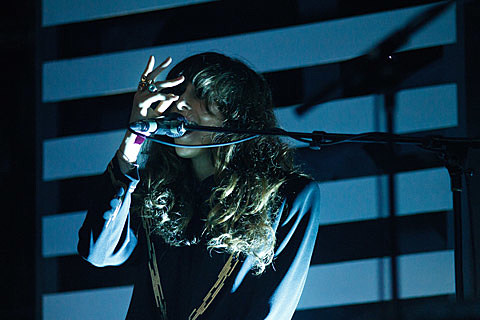 What may end up being a very major NYC music festival, Governors Ball, begins today with sets from Beach House, Feist, Dinosaur Jr., Polica and more. It's looking like rain all day, but the fest is 100% rain or shine so bring a poncho. If you're going today, how are you getting there?

Governors Ball also has a number of official afterparties. There's some great ones tonight, including Japandroids/Crocodiles, Dinosaur Jr., and Polica.

After saying hi to David Letterman and going crate-digging, Queens of the Stone Age will play a sold-out Brooklyn Masonic Temple. Did you manage to snag tickets?

It may be cold and rainy, but the glowing tubes in the amps at Saint Vitus tonight will be warm. New Relapse signees Windhand team with Kings Destroy (their record release party), Clamfight and Belus as part of an InvisibleOranges event and a larger Windhand tour. Tickets are still available.

If you're looking for something to do after work, there's a Memphis punk double-threat happening at the the Seaport Music Festival with legends The Oblivians and upstarts Ex Cult. The rain moved the event down the street to the Beekman Beer Garden (under their giant tented area). Still free but Beekman is 18+. Sorry, minors!

While Of Monsters and Men cause the Governors Ball masses to sway in the rain, their tourmates, Montreal's talented Half Moon Run, will be performing at Glasslands.

Broken Social Scene are celebrating the 10th anniversary of their landmark LP, You Forgot it in People, and snuck down to NYC to play Late Night with Jimmy Fallon with their sometimes vocalist Feist (who plays Governors Ball) in tow. They did "Almost Crimes" on the show and then did "7/4 Shoreline" as a web exclusive. Watch them both below.

Meanwhile, Park & Recreation costars Adam Scott and Amy Pohler collaborated on "The Greatest Event in Television History": a shot-for-shot recreation of the opening credits of '80s mystery-adventure series, Hart to Hart. And you can watch that (and a making-of doc) below too.

The Greatest Event in Television History: Hart to Hart