Joey Bada$$ at SUNY Purchase in 2012 (more by Kellyann Petry) 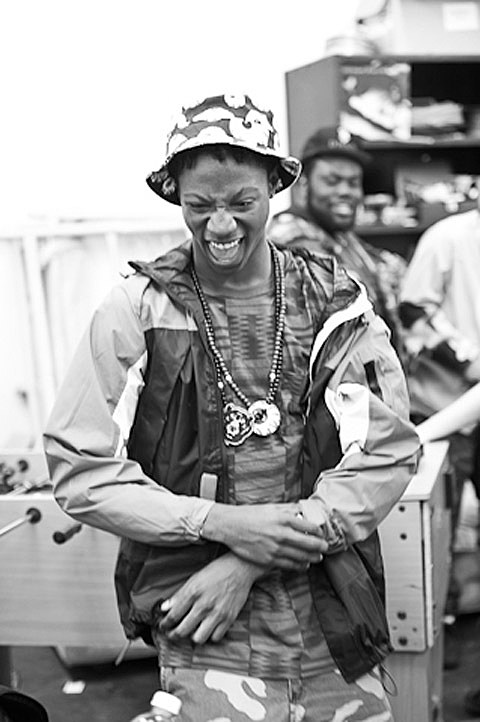 Joey Bada$$ @ 285 Kent
Exciting young Brooklyn rapper Joey Bada$$ plays a sold-out show at 285 Kent tonight with his Pro Era crew. It was supposed to be a release show for his new Summer Knights mixtape, but that release has been pushed back to July 1. However, Joey's still promising that he'll be playing the new material at tonight's show. He just released another song from the new mixtape, "95 Til Infinity," today. Download it above or stream it below.

Gunplay @ SOB's
Speaking of rap mixtape release parties, Gunplay plays one at SOB's tonight for his new release, Acquitted, which is out now and free.

The Antlers @ Le Poisson Rouge
Le Poisson Rouge's 5th anniversary celebration continues tonight with a sold-out show from The Antlers, for whom the venue is an intimate one. Support comes from Dave Harrington of Nicolas Jaar's band.

Devendra Banhart @ Town Hall
Devendra Banhart is continuing to tour in support of his new album, Mala, and comes to NYC for a show at Town Hall tonight. Rodrigo Amarante (of Little Joy) opens the show.

The Heavy @ Webster Hall
The Heavy's last big trip to New York was a little less than a year ago when they headlined Irving Plaza and played Letterman. Moving up in the world, they will be at Webster Hall tonight with The Silent Comedy and The Skins. Tickets are still available

Nothing Changes w/ Lok Rahbek and Body of Light @ Home Sweet Home
Lok Rahbek of Swedish duo Lust for Youth (who recently played Chaos in Tejas) teams with Body of Light for a show at Home Sweet Home late tonight, part of the ongoing Wednesday night goth-tinged party. Look for DJ sets from Taylor Brode of Sacred Bones as well as Syb Vicious.

Chickfactor 21 w/ Future Bible Heroes, The Aluminum Group & more @ The Bell House
Night Two of the indie zine's three-night soiree may or may not feature an appearance from Stephin Merrit who is definitely not touring with Future Bible Heroes. But as one Chickfactor's writers, they may coax him out into public. Also playing are Chicago's debonair The Aluminum Group who haven't played NYC in eons -- check out a track below. Tickets are still available.

The School @ Cake Shop
Do you like Camera Obscura? The School are kind of the Welsh version, with a whole classroom full of members to make their winsome, shy pop. They played a nice set last week at Cake Shop as part of NYC Popfest.

Radiation City @ The Mercury Lounge
This Portland, OR outfit mine a similar strain of '60s pop as The School, but with maybe a little more eye to the present, and a little more flair. Their new album, Animals in the Median, is quite alluring.

Chateau Marmont, Team Ghost DJ sets @ The DL
This event of the "France Rocks" series and features Parisians Chateau Marmont who "groove" more than they "rock," but they are from France. If your tastes lean towards yacht rock, they're worth checking out. Team Ghost, meanwhile, is the new group fronted by Nicolas Fromageau who was an original member of M83. Tonight is just DJ sets from the two bands but they'll both be playing Northside Festival.

Conveyor, New Myths, Norwegian Arms, Leapling @ Pianos
Brooklyn glitch folk act Conveyor are in the midst of a June residency at Pianos. Tonight's the second week which features support a solid line-up of locals, including Leapling who we profiled a while back.

Xenia Rubinos, Half Waif & more @ Death By Audio
Xenia is playing shows this weekend with Sinkane but if you want to see her in a more gritty atmosphere to Williamsburg DIY spot where she'll be playing with Half Waif, who gives off nice Austra-y vibes on her new EP.

Companion, Evangelicals, Air Waves @ Union Pool
Solid night of local music, featuring Norman, OK's Evangelicals and Pepi Ginsberg's chamber pop ensemble Companion. Air Waves, who we haven't heard from in a while, is also on the bill. $8 at the door.

Yellow Dogs, Dinowalrus, EULA, Shark? @ Brooklyn Bowl
Here's four bands that are all constants on the NYC indie circuit. Here you can see them all together while perhaps knocking down some pins at Brooklyn Bowl. The free RSVP is closed but you can get in for $6.