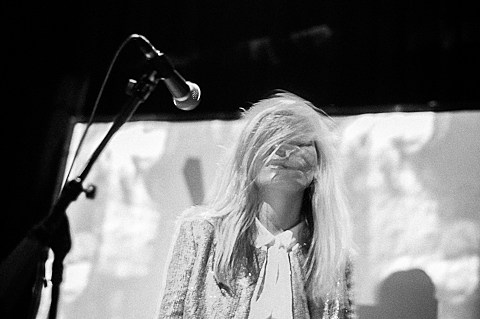 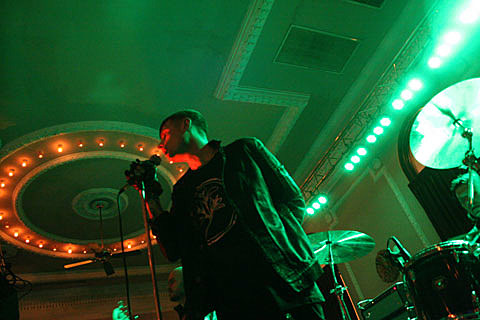 Austra @ Other Music
Austra put out their terrific sophomore album, Olympia, this week, and before their tour hits NYC tomorrow for a sold-out MHOW show with Mozart's Sister, they'll be stopping by downtown Manhattan record store Other Music for a free in-store at 8 PM. You can listen to their new album on Spotify.

Cold Cave, Boyd Rice @ Saint Vitus
A late night rendez-vous with Cold Cave sounds pretty appropriate, especially in the dark, church-themed recesses of Saint Vitus in Brooklyn. There, Wesley Eisold will present new material from his cavalcade of new 7"s released this year, and be joined by the ever-controversial Boyd Rice. Totally worth the extra yawns tomorrow morning. Sold out.

Low, Mike Doughty @ Music Hall of Williamsburg
Slowcore vets Low returned this year with a new Jeff Tweedy-produced album, The Invisible Way, and already celebrated it with some shows around the time of its release. Now they're on the road again for some shows with Soul Coughing's Mike Doughty, and are swinging through NYC again tonight for a show at Music Hall of Williamsburg. Maybe they'll play a long drone set?

Shannon & the Clams, Las Rosas, Hector's Pets, The Foxx @ Death by Audio
Oakland, CA's super-fun Shannon & The Clams bring their tour with Mikal Cronin (which just hit NXNE) to NYC tomorrow for a Bowery Ballroom, but before that, Shannon plays a headlining show at Death by Audio tonight. If you haven't heard the down-n-dirty rock n' roll party that is their new album, Dreams in the Rat House, you can stream it via Spotify. Las Rosas (ex-Harlem) and Hector's Pets, who both just did some gigging during Northside, are on tonight's bill too, as are The Foxx.

Conveyor, Twin Peaks & more @ Pianos
Chicago youngsters Twin Peaks are still in town after coming down to visit for Northside. If you missed them on Saturday, they're playing Pianos tonight as part of Conveyor's June residency there.

Hausu @ Cake Shop
This portland combo take minor chord mope and crush it under the force of overdriven guitars. Their debut album, Total, is out next week (6/25) via Hardly Art. You can stream it via SPIN and can probably pick it up tonight at the merch table. Also on the bill: Palm and Grey Nurse.

The B-52s, The Go-Go's @ Roseland Ballroom
After canceling a recent NYC-area date, new wave legends The B-52s appear to still be on for tonight's Roseland show with The Go-Go's. Tickets for tonight's show are still available.

Crstyal Fighters, Alpine @ Webster
If you're going to see British/Spanish dancepop outfit Crystal Fighters' sold out show tonight, do get there early and check out Australia's Alpine, whose debut album is finally out in North America and worth a listen. (Stream it via Rdio.) The band also recently covered Radiohead's "Just" for the AV Club's "Undercover" series and you can watch that below.

Beach Day, Butter the Children & more @ Shea Stadium
Poppy Florida trio Beach Day released their debut album. Trip Trap Attack, this week and you can stream it at Rdio or Spotify. They'll be celebrating its release tonight at Shea Stadium with Hellbirds, Butter The Children, and Hippy playing as well.

Puce Mary @ Home Sweet Home
Denmark's Puce Mary (aka drone/industrial artist Frederikke Hoffmeier) came over to NYC for the Northside Festival, where they played the Pitchfork showcase with a mostly Danish lineup of Iceage, Lower, Loke Rahbek, Age Coin, and Lust for Youth. She's sticking around NYC for own show tonight at Home Sweet Home's "Nothing Changes" party. You can stream a Puce Mary track below.

J. Cole @ Irving Plaza
Rapper J. Cole brings his Dollar & A Dream tour to NYC tonight. Each venue he's playing on this tour is being announced day of the show, and it's been revealed that tonight's show is at Irving Plaza. Admission is $1 at the door. First come, first serve.

For laughs (like tonight's Big Terrific at Cameo), check out the NYC Comedy calendar too.