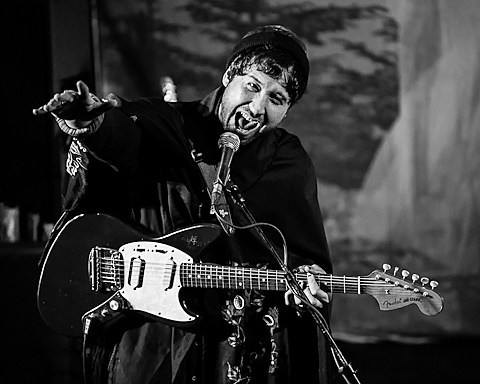 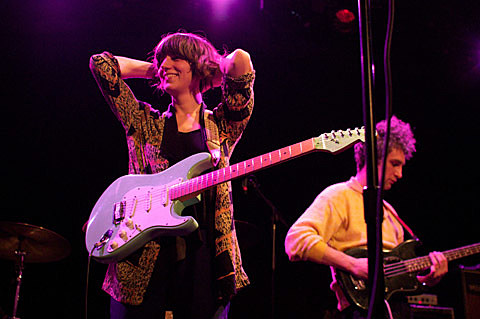 Unknown Mortal Orchestra, Bass Drum of Death @ South Street Seaport (FREE)
It seems like this year's Seaport Music Festival just got started but here we are at the last free show of the 2013 season. It's a good one too: Portland's Unknown Mortal Orchestra are custom made for breezy outdoor listening. Mississippi's Bass Drum of Death open, making for a great lead-in to tomorrow's 4Knots Festival. 7PM.

Dirty Beaches, Heathered Pearls, Eola, Porcelain Raft @ Glasslands
Dirty Beaches released his new experimental double album, Drifters/Love is the Devil, and after having played a solo set of mainly Drifters material at Mercury Lounge on Wednesday (6/26), the one-man band will tonight be joined by Heathered Pearls (aka Jakub Alexander) and Eola (aka Ed from TONSTARTSSBANDHT)) for a collaborative set of the Love is the Devil portion of the album. According to Alex, "you might not recognize any of the songs for this night" because of the rearrangements the trio will be doing. Should be interesting to see what they have in store. Porcelain Raft (who has his own new album on the way) opens the show.

Dax Riggs, Spires @ Mercury Lounge
Electric bluesman Dax Riggs will show his dark side (his favorite side, it seems) at Mercury Lounge tonight. The Louisiana-bred songwriter will pull from his considerable catalog of solo material for the outing, just dont expect any Acid Bath covers. Openers Spires make jangly psych-pop and are worth getting there early for. Tickets are still on sale.

Old 97's, Wormburner @ Brooklyn Bowl
Old 97's continue their run of full-album performances, tonight's being 1995's Wreck Your Life, plus another set as well. Tickets are still available. Note that Tommy Stinson was originally supposed to open this show but has been subbed-out by Wormburner. Maybe Tommy is busy with Replacements practice?

Har Mar Superstar, Born Cages @ Knitting Factory
Speaking of, Har Mar Superstar -- who is not the Replacements new guitarist -- plays tonight with Born Cages. Despite tricking us, we admit he always puts on a fun show. Tickets are still available and only five bucks.

Heems @ Grove Alley Night Market (FREE)
Former Das Racist member Heems will open for Riff Raff at Highline Ballroom next month, but tonight you can see him play his own show, and for free, at Grove Place Alley. Also on the bill is The Toothaches, Trouble City All-Stars, and DJ Joro Boro. Show goes from 5 PM to 11 PM. RSVP and more info here. Flyer below. 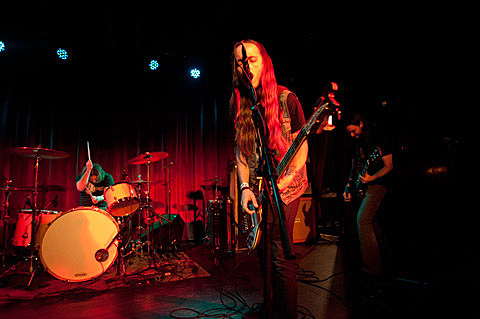 Martyrdoom @ Paper Box
Cough joins names like Execration, Morbosidad, The Flight of Sleipnir and Grave Ritual as part of a two stage bill at Paper Box, the first official night of Martyrdoom II. Is it too hot to wear a studded leather jacket or a denim vest covered in patches? We'll find out later.

Locrian @ Saint Vitus
Dark ambient gods Locrian will make a rare appearance at Saint Vitus tonight, roping in support from the venerable Sannhet for the evening. Expect spookiness, fog, and and an excellent live show.

Dropdead, Iron Reagan, Agitator, Nuclear Santa Claust @ Acheron
Animal liberation and politics arent the only thing that Dropdead is preaching about. Most importantly, the longstanding Rhode Island quartet cares about brutal, honest and in your face hardcore, which will be in spades at Acheron tonight. Municipal Waste side project Iron Reagan supports Dropdead, and will be filming a video at the venue.

Pleasure Leftists @ 70 N. 6th
Cleveland's Pleasure Leftists were in NYC last night for a show at Acheron, and tonight you can catch the post-punk band in an even more intimate location: the 70 N 6 St loft (above Public Assembly). It's a late show (10PM-4AM) and admission is only $2 at the door.

Jill Scott, BJ the Chicago Kid @ Oakdale Theatre (CT)
It's about an hour-plus drive out of NYC, but tonight's Oakdale Theatre show in Wallingford, CT is the only headlining NYC-area date on neo-soul great Jill Scott's tour. Plus, support comes from likeminded newcomer BJ the Chicago Kid, who has contributed his vocals to multiple Black Hippy projects, Big K.R.I.T., Freddie Gibbs, and more.

Krill @ Big Snow Buffalo Lodge
Boston indie rockers Krill released their new album, Lucky Leaves, and they're celebrating with a record release show in Brooklyn tonight at Big Snow (89 Varet St) with The Doozies, Cool Memories, and Bueno. Krill's album is filled with nasal-voiced college rock hooks and quirks, and the whole thing can be streamed (via Noisey) below.

Ed Schrader's Music Beat, The Hussy, Barkley's Barnyard Critters, Shark Muffin @ Death by Audio
Floor tom/bass guitar post-punk duo Ed Schrader's Music Beat will be touring with Ceremony later this summer, making for some great double bills (or triple bills if you head to the CT show with Joyce Manor), but you can catch them headlining a gig before that tonight at Death by Audio. The bill also includes Lightning Bolt side project Barkley's Barnyard Critters, in addition to The Hussy and Shark Muffin.

John Waters @ City Winery
Lover of kitch, director of filth (in the best way), Baltimore legend and filmmaker John Waters is doing a one-man-show tonight and tomorrow at City Winery. Tickets for tonight are still available.

For more funny stuff, check out our check out the NYC Comedy calendar too.

Monty Luke, Mike Simonetti @ Cameo
Cameo's hosting a late-night dance party (11:59 doors) headlined by Detroit techno DJ Monty Luke, and also featuring a set by Mike Simonetti, who runs Italians Do It Better with Johnny Jewel (Chromatics, Glass Candy, Desire). To get an idea of what tonight might be like, stream a recent Monty Luke mix below.

Du Tonc, Mighty Mouse, JDH & Dave P @ Glasslands
Another good late-night dance option is the FIXED party (11:30 doors) with a live set from Du Tonc, who will be making their NYC debut at the show. DuTonc is the new duo comprised of Mat Van Schie from Australia synth pop band Van She and producer Mighty Mouse (who opens the show with a solo set). FIXED regulars JDH & Dave P are on the bill too.

Blowoff DJ set @ Gramercy Theatre
One of the unofficial NYC Pride events going on tonight is Bob Mould and Rich Morel who are bringing their Blowoff party to Gramercy Theatre, spinning their "signature mix of indie rock, electro and house." Sold out.

In addition to the bigger shows, it's also a pretty good night to check out some local stuff. Mercury Lounge hosts Firehorse and Baby Alpaca; Brooklyn venues Silent Barn and Shea Stadium both have good shows tonight, with Darlings, Juniper Rising, A. Rex & J. Rex, and King Prom at the former; and Sham-poo, Le Rug, Lost Boy?, and Slonk Donkerson at the latter; LES venue Pianos is hosting NJ garage rockers The Everymen, along with The Vontons, The Great American Novel, and Tex And The Girls.