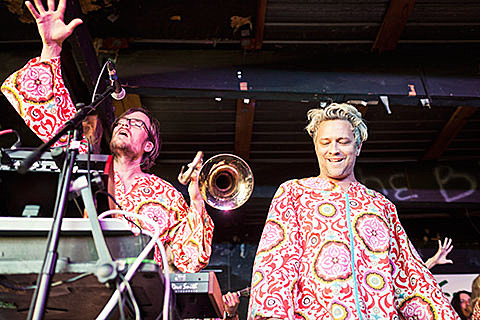 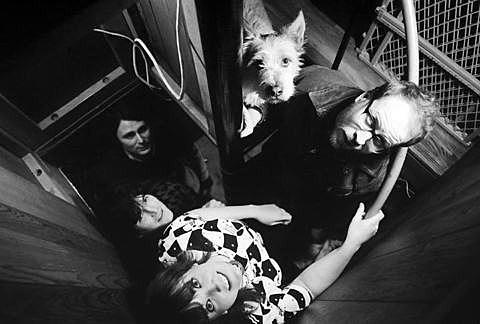 Squarepusher, SFV Acid @ Le Poisson Rouge
Drill & bass veteran Squarepusher came to NYC last year for a big Terminal 5 show, but this week he's back for two shows at a much more intimate space, Le Poisson Rouge. Since we last spoke, it was announced that SFV Acid, who released his Starbucks-inspired debut album, The Dwell, back in May, was added to both shows, making for a great double bill. Despite the small size of these shows, tickets (adv $35, day $40) for both nights are still available.

The Denzels, The Mantles, Juan Wauters, Honduras @ Shea Stadium
San Francisco's Mantles no doubt own a copy of essential garage comp Nuggets (and a couple Kinks albums), as evidenced on their terrific Slumberland debut, Long Enough to Leave. This is their first of two NYC shows on their tour with The Beets' Juan Wauters. $8 at the door.

'Crystal Fairy' screening @ Wythe Hotel
Michael Cera and director Sebastian Silva will be in attendance at the BrooklynVegan-Presented free screening of 'Crystal Fairy' tonight at the Wythe Hotel, however RSVP is now closed. If you did RSVP and receive a confirmation though, please show up early as space is limited even for those on the list.

The Polyphonic Spree, Harper Simon, AVAVA @ Music Hall of Williamsburg
Progressive pop cult The Polyphonic Spree always put on a memorable show (they were one of the highlights of our SXSW parties this year), and tonight they begin a 2-night run in NYC. You can catch them in Brooklyn tonight at MHOW and in Manhattan tomorrow at Bowery Ballroom.

CSS, IO Echo @ Brooklyn Bowl
Brazilian electro rockers CSS released their new Dave Sitek-produced LP, Planta, back in June, and this week they're bringing their tour with another pop-minded band, IO Echo, to NYC for two shows. They hit Bowery Ballroom last night, and you can catch them tonight at Brooklyn Bowl.

Monkey: Journey to the West @ Lincoln Center
Damon Albarn, Chen Shi-Zheng, and Jamie Hewlett's musical take on one of China's most famous tales features acrobats, martial arts, and an array of contortionists. It made its NYC over the weekend and continues tonight.

Week of Wonders, Shark?, Hippy @ Death By Audio
Seattle's Week of Wonders continue their week-long assault on NYC with their second of four shows here. Tonight's support is a nice line-up of local indie rock (check out Hippy). Flown were originally scheduled to play but had to cancel.

Bass Drum of Death, The So So Glos, Baked @ Glasslands
Garage rockers Bass Drum of Death just brought their tour through NYC for a free show with UMO last month, and tonight they do their second of two headlining gigs in not-free, much smaller venues. Tonight's openers are The So So Glos and Baked. Tickets are still available.

So Many Dynamos, Pretty & Nice @ Mercury Lounge
If you like early-'80s new wave powerpop like The dB's, XTC and Squeeze, you'll probably dig Boston's Pretty & Nice, whose new album, Golden Rules for Golden People, stands proudly in that hooky tradition. Tonight is their first of two shows with St. Louis' So Many Dynamos. Tickets are still available.

Spires, Hints, Painted Zeros @ Pianos
If you like chiming, pre-Oasis Britpop, Spires brand of melodic psych rock will surely strike a chord. This is the first night of Spires' July residency at the Ludow St. club.